Scientists One Step Closer to Forecasting 'Clear Skies' for Astronauts
Scientists funded by NASA's Living With a Star program have made a big stride forward in learning how to forecast "all clear" periods where severe space weather is unlikely. Such forecasts are important for astronauts, especially outside the Earth's magnetic shield who are planning spacewalks, and for satellite and aircraft operators.

Image Right: Scientists study the complex patterns of solar magnetic field lines to predict storms, which is not always reliable. This new method combines computer models with images of the active solar surface and atmosphere (corona) from the TRACE (shown) and SOHO spacecraft. Click on the image for movie, or download print resolution still. Credit: NASA/LMSAL.

"We have a much better insight into what causes the strongest, most dangerous solar flares, and how to develop forecasts that can predict an 'all clear' for significant space weather, for longer periods," said Dr. Karel Schrijver of the Lockheed Martin Advanced Technology Center (ATC), Palo Alto, Calif., lead author of a paper on this research published in the Astrophysical Journal.

Image Below Left: Solar flares are violent explosions in the atmosphere of the Sun caused by the sudden release of magnetic energy. Like a rubber band twisted too tightly, stressed magnetic fields in the Sun's atmosphere can suddenly snap to a new shape, and can release as much energy as ten billion one-megaton nuclear bombs.

The team also found that flares do not necessarily occur immediately upon the emergence of a new magnetic field. Apparently the electrical currents must build up over several hours before the fireworks start. Predicting exactly when a flare will happen is like studying avalanches. They occur only after enough snow pack has built up. However, once that threshold has been reached, the avalanche can happen anytime by processes not yet completely understood. 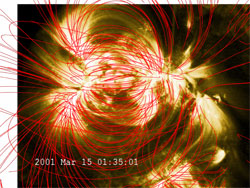 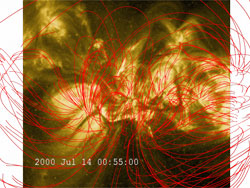 Images Above:In this visualization, the SOHO magnetic maps (black and white) show the evolving field. When scientists use this to compute the computer model (red), they watch to see if it matches up with the TRACE images (gold); if it does, the region will be quiet (left image), but if not, expect stormy space weather (right image). Click on the images for movies or download print resolution stills. Credit: NASA/ESA/LMSAL

The researchers made the discovery by comparing data about magnetic fields on the Sun's surface to the sharpest extreme-ultraviolet images of the solar atmosphere (corona). The magnetic maps came from the Michelson Doppler Imager (MDI) instrument on board the Solar and Heliospheric Observatory (SOHO) spacecraft, and the corona images were from the Transition Region and Coronal Explorer spacecraft (TRACE). The team also used computer models of a three-dimensional solar magnetic field without electrical currents (based on SOHO images). Differences between images and models indicated the presence of large electrical currents.