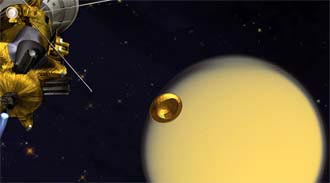 The Huygens probe, built and managed by the European Space Agency, was bolted to Cassini and has been riding along during the nearly seven-year journey to Saturn largely in a "sleep" mode. Huygens will be the first human-made object to explore on-site the unique environment of Titan, whose chemistry is assumed to be very similar to that of early Earth before life formed. Huygens will tell us whether this assumption is correct.

"We wish to congratulate our European partners as their journey begins and wish them well on their descent to Titan," said Robert T. Mitchell, Cassini program manager at NASA's Jet Propulsion Laboratory, Pasadena, Calif. "We are very excited to see the probe off and to have accomplished this part of our job. Now we're ready to finish our part – receiving and relaying the Huygens data back to Earth."

"Today's release is another successful milestone in the Cassini-Huygens odyssey," said Dr. David Southwood, director of science program for the European Space Agency. "This was an amicable separation after seven years of living together. Our thanks to our partners at NASA for the lift. Each spacecraft will now continue on its own but we expect they'll keep in touch to complete this amazing mission. Now all our hopes and expectations are focused on getting the first in-situ data from a new world we've been dreaming of exploring for decades."

The Huygens probe will remain dormant until the onboard timer wakes it up just before the probe reaches Titan's upper atmosphere on Jan. 14, 2005. Then it will begin a dramatic plunge through Titan's murky atmosphere, tasting its chemical makeup and composition as it descends to touch down on its surface. The data gathered during this 2-1/2 hour descent will be transmitted from the probe to the Cassini orbiter. Afterward, Cassini will point its antenna to Earth and relay the data through NASA's Deep Space Network to JPL and on to the European Space Agency's Space Operations Center in Darmstadt, Germany, which serves as the operations center for the Huygens probe mission. From this control center, ESA engineers will be tracking the probe and scientists will be standing by to process the data from the probe's six instruments.

On Monday, Dec. 27, the Cassini orbiter will perform a deflection maneuver to keep it from following Huygens into Titan's atmosphere. This maneuver will also establish the required geometry between the probe and the orbiter for radio communications during the probe descent.

More information on the Cassini-Huygens mission is available at: http://saturn.jpl.nasa.gov and http://www.nasa.gov/cassini.