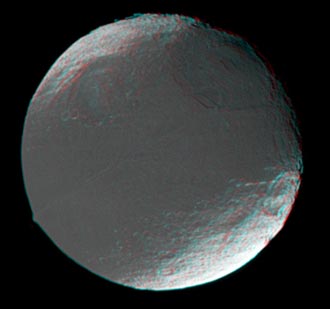 Image left: This stereo view of Iapetus shows the spherical shape of Iapetus and some of the moon's topography. The prominent linear ridge in the center of the dark area - a place known as Cassini Regio - marks the equator quite closely. The ridge was first discovered in this set of images and was seen at higher resolution in images taken during Cassini’s flyby of Iapetus on New Year’s Eve 2004. Image credit: NASA/JPL/Space Science Institute. + Full image and caption.

One of these features is a long narrow ridge that lies almost exactly on the equator of Iapetus, bisects its entire dark hemisphere and reaches 20 kilometers high (12 miles). It extends over 1,300 kilometers (808 miles) from side to side, along its midsection. No other moon in the solar system has such a striking geological feature. In places, the ridge is comprised of mountains. In height, they rival Olympus Mons on Mars, approximately three times the height of Mt. Everest, which is surprising for such a small body as Iapetus. Mars is nearly five times the size of Iapetus.

Iapetus is a two-toned moon. The leading hemisphere is as dark as a freshly-tarred street, and the white, trailing hemisphere resembles freshly-fallen snow.

The flyby images, which revealed a region of Iapetus never before seen, show feathery-looking black streaks at the boundary between dark and bright hemispheres that indicate dark material has fallen onto Iapetus. Opinions differ as to whether this dark material originated from within or outside Iapetus. The images also show craters near this boundary with bright walls facing towards the pole and dark walls facing towards the equator. 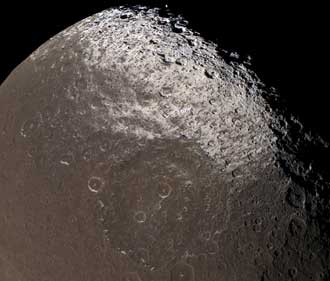 Cassini's next close encounter with Iapetus will occur in September 2007. The resolution of images from that flyby should be 100 times better than the ones currently being analyzed. The hope is that the increased detail may shed light on Iapetus' amazing features and the question of whether it has been volcanically active in the past.

With a diameter of about 1,400 kilometers (890 miles), Iapetus is Saturn's third largest moon. It was discovered by Jean-Dominique Cassini in 1672. It was Cassini, for whom the Cassini-Huygens mission is named, who correctly deduced that one side of Iapetus was dark, while the other was white.

The Cassini-Huygens mission is a cooperative project of NASA, the European Space Agency and the Italian Space Agency. The Jet Propulsion Laboratory, a division of the California Institute of Technology in Pasadena, manages the Cassini-Huygens mission for NASA's Science Mission Directorate, Washington, D.C. The Cassini orbiter and its two onboard cameras were designed, developed and assembled at JPL. The European Space Agency built and manages the development of the Huygens probe and is in charge of the probe operations. The Italian Space Agency provided the high-gain antenna, much of the radio system and elements of several of Cassini's science instruments. The imaging team is based at the Space Science Institute, Boulder, Colo.