An Unusual Light Show
Millions of people around the world were treated to a brilliant display of aurora lights this week. The Sun produced at least five major "halo" coronal mass ejections (CMEs) over the period of Nov. 4-8, an unusually fast pace for solar activity. 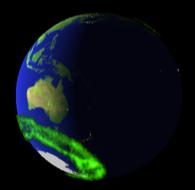 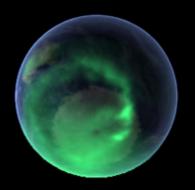 A "halo" CME occurs when a CME produces an expanding circle of particles all around the Sun. When observers see this they know the CME is heading directly towards or away from Earth. In this case, all were headed in our direction, bringing the auroral light show with them. The source of storms was a group of sunspots called Active Region 696. The area also produced powerful solar explosions called flares.

Image Left: The LASCO instrument on the Solar and Heliospheric Observatory (SOHO) gives the best view of the wispy halo CME blowing out into space. LASCO observes the solar corona, the outer atmosphere where all the storms transpire, by blocking out the Sun like an eclipse. That small circle in the center of the image is the Sun. Click on the image for a smaller movie or download the larger movie and print resolution still. Credit: NASA/ESA 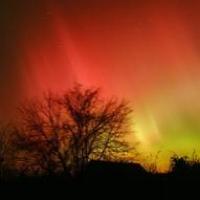 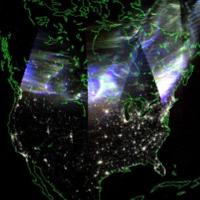 Image Left:This week's storm was so intense, aurora were spotted as far south as Alabama. This shot was taken in Plymouth, OH on Nov. 7. Credit: Terry Lutz. Image Right: An ultraviolet view of the aurora is superimposed on a city lights image from a weather satellite. The TIMED spacecraft made three passes over the U.S., but after the peak of the storm. Click on image for larger version or check the polar view. Credit: NASA/APL/Meteorological Satellite Applications Branch, Air Force Weather Agency.

This kind of solar activity is getting increasingly rare as we enter into the quiet period of the Sun's eleven-year cycle of activity. The years 2000-2001 marked the highest point of activity, but that doesn't preclude the occasional surprise like this week's CMEs. Even more significant were the intense solar storms that raged about a year ago.