A Summer Flare from the Sun to the Earth 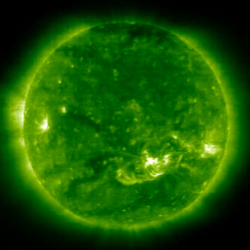 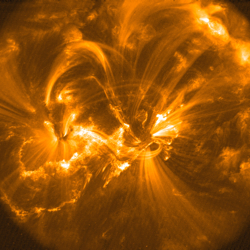 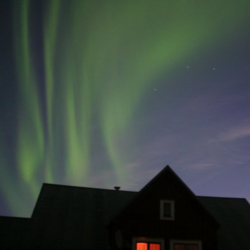 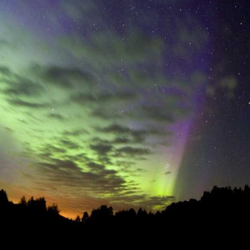 Top Left: Movies of the solar eruption from the Solar and Heliospheric Observatory (SOHO) spacecraft taken Aug. 13 through Aug. 16. Click on the image for a large movie or download a small movie | quicktime movie | high-res close-up | medium close-up. Credit: NASA/ESA Top Right: Close-up view on the active region from the Transition Region and Coronal Explorer (TRACE). Click on image for movie or download the high-resolution still. Credit: NASA/LMSAL

Scientists say that the next solar cycle of activity is close-by; read Backward Sunspot to check out the sunspot that may be starting the whole process.

In the meantime, this large sunspot, named Active Region 904, has been sputtering on for days on end. After watching it rotate into view on Aug. 9, it finally popped off a modest (C-class) flare and associated coronal mass ejection (CME) on Aug. 17 when it had rotated into a location where it practically faced Earth. Solar flares and CMEs -- associated giant clouds of plasma in space -- are the largest explosions in the solar system and can pack the force of a billion megaton nuclear bombs. They are caused by the buildup and sudden release of magnetic stress in the solar atmosphere above the giant magnetic poles we see as sunspots.

The coronograph movies from SOHO of the event show the CME cloud that headed towards Earth, triggering the auroras photographed two and three days later. The aurora, also known as the Northern and Southern Lights, form when solar particles and magnetic fields pump energy into the Earth's magnetic field, accelerating electrically charged particles trapped within. The high-speed particles crash into Earth's upper atmosphere (ionosphere) over the polar regions, causing the atmosphere to emit a ghostly, multicolored glow. Click here to download a movie showing this process (10.2 MB).

NASA's upcoming Solar Terrestrial Relations Observatory (STEREO) will help researchers better understand space weather in order to make more accurate predictions and take better precautions. While a fleet of spacecraft already fly between the sun and Earth trying to gain a better perspective on the sun's powerful blasts, STEREO will be the first to provide a three-dimensional view. This additional information will help us understand how and why CMEs, the primary driver of space weather, occur and how they move through space.

Better prediction means more warning time for satellite and power grid operators to put their assets into a "safe mode" to weather the storm while a better understanding will help engineers figure out how to build better and more resilient systems. It's also important for astronauts working in space, who need to advanced notice to avoid the intense radiation associated with the storms.