Searching for the Grandest Asteroid Tour
Asteroids are Earth's closest celestial neighbors, sometimes passing closer to Earth than even the Moon. And yet, to date, only two spacecraft have ever remained in proximity to one of these bodies. Last month, orbit mechanics experts from around the world met to discuss methods for finding the best possible spacecraft trajectory, or flight path, for visiting a sequence of asteroids. The gathering was part of the second Global Trajectory Optimisation Competition, organized by JPL.

The idea of an asteroid grand tour is a celestial analogue to the Grand Tour embarked upon by Renaissance travelers seeking to further their cultural knowledge of Europe. Just as the traveler had to judge carefully which cities to visit based on his or her available resources, so must designers of a spacecraft flight path contend with limited resources and constraints. Such restrictions include the rocket's ability to launch the spacecraft into space, the strength of the spacecraft's thruster, orbital positions of the various asteroids over time, and the spacecraft's longevity. 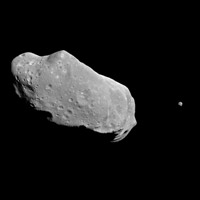 Determining the best possible trajectory within these constraints, out of the many good ones, is not a trivial matter. It requires a big-picture, or global, view of all the possibilities, that is, it requires global optimization. There are many possible approaches, each with its own strengths and weaknesses.

The inspiration for this problem was the need to study closely different types of asteroids. By visiting a member of each of four different asteroid groups, a spacecraft would provide insights into their chemical composition, their structural characteristics, how they formed, and which might be suitable for future space mining operations. Such insights would also be critical should the need ever arise to deflect an asteroid that is found to be on an Earth-threatening trajectory.

The problem posed by JPL's Outer Planets Mission Analysis Group for the second competition was to design a flight path for visiting four asteroids-- one from each group -- in the shortest amount of flight time and with the least amount of propellant. With almost 1,000 asteroids to choose from, more than 41 billion asteroid sequences could be considered. That's far too many to study individually in the short time allocated for the competition, even with the fastest computers, largest computer clusters and best algorithms.

Fourteen teams - from Europe, Russia, China and the U.S. - sought the elusive best possible trajectory. Their search took place over a period of four weeks late last year, at the end of which they submitted their top solution to be ranked against those of the other teams.

The winning trajectory was found by a team from the Polytechnic of Turin, Italy. Two professors, Lorenzo Casalino and Guido Colasurdo, along with Ph.D. student Matteo Rosa Sentinella and graduate student Francesco Cacciatore, successfully and quickly screened out billions of possible asteroid sequences to focus on the most practical ones. Their winning trajectory, involving visits of four different asteroids in just over nine years, was followed by trajectories from a Russian team (the Moscow Aviation Institute and the Khrunichev State Research and Production Space Center), and a team from the European Space Agency's Advanced Concepts Team.

The workshop where the various teams convened for their discussions took place in Sedona, Ariz., in conjunction with the Space Flight Mechanics Meeting of the American Astronautical Society and the American Institute of Aeronautics and Astronautics.

Did the competition yield the best possible trajectory? With such complexity, it is likely impossible to say, but an educated guess, and the insights gained by comparing the various teams' methods, would suggest that there is still some room for improvement. The Turin team, as winners of this year's competition, will now be organizing the Third Global Trajectory Optimisation Competition, where various teams will again have the opportunity to test their mettle in solving the most challenging problems currently faced by spacecraft trajectory designers.

The Global Trajectory Optimisation Competition was instituted in 2005 by Dario Izzo of the European Space Agency's Advanced Concepts Team. As winners of the first competition, the JPL team organized this latest one, with support from NASA's In-Space Propulsion Program.

For further information about asteroids and the Near-Earth Object Program, visit: http://neo.jpl.nasa.gov .