More Clues Emerge to Mars' Watery Past
Earth might not be the only planet in our solar system to have hosted salty seas. NASA's Opportunity has uncovered evidence that the rocks near its landing site on Mars not only were once wet, but likely formed at the bottom of a body of gently flowing saltwater.

Image above: This image shows a panoramic view of the crater where the Opportunity rover had been exploring since its dramatic arrival in late January 2004. The rover's lander is visible in the center of the image. Track marks reveal the rover's progress. + Click for Larger Image. Image credit: NASA/JPL/Cornell.

"We think Opportunity is now parked on what was once the shoreline of a salty sea on Mars," said Dr. Steve Squyres of Cornell University, Ithaca, N.Y., principal investigator for the science payload on Opportunity and its twin Mars Exploration Rover, Spirit.

Dr. Ed Weiler, NASA associate administrator for space science, said, "This dramatic confirmation of surface water in Mars' history builds on a progression of discoveries about that most Earthlike of alien planets. This result gives us impetus to expand our ambitious program of exploring Mars to learn whether microbes have ever lived there and ultimately whether we can."

At a press conference at NASA Headquarters announcing the findings, NASA Administrator Sean O'Keefe said the discovery would have "profound implications for future exploration." 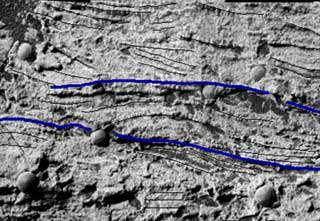 Image above: This magnified view from Opportunity shows a portion of a martian rock with fine layers at angles to each other. Interpretive black lines trace layers that indicate the sediments that formed the rock were laid down in flowing water. The interpretive blue lines point to boundaries between the layers. + View Image Feature. Image credit: NASA/JPL/Cornell/USGS.

Rippled patterns in the rocks at Meridiani Planum suggest that the land there was once a salt flat or playa, sometimes covered by shallow water and sometimes dry, said Dr. John Grotzinger, rover science-team member from the Massachusetts Institute of Technology, Cambridge. Such environments on Earth, either at the edge of oceans or in desert basins, can have currents of water that produce the type of ripples seen in the Mars rocks.

According to Grotzinger, the sand-sized grains of sediment making up the rocks were shaped into ripples by water at least 5 centimeters (2 inches) deep -- possibly much deeper -- and flowing at a speed in the range of 10 to 50 centimeters (4 to 20 inches) per second.

Telltale patterns called crossbedding and festooning, in which some layers within a rock lie at angles to the main layers, led scientists to the conclusion that the rippled shapes formed under a current of water -- and not wind. Festooned layers have smile-shaped curves that are produced when loose sediments are shifted by water.

"Ripples that formed in wind look different than ripples formed in water," Grotzinger said. Some patterns seen in the outcrop that Opportunity has been examining might have resulted from wind, but others are reliable evidence of water flow, he said.

So far, the findings do not specify how long liquid water covered the area, or how long ago, but controllers at NASA's Jet Propulsion Laboratory in Pasadena, Calif., plan to send Opportunity out across the a plain toward a thicker exposure of rocks in the wall of a crater that should add to the story.

A second line of evidence, observations of chlorine and bromine in the rocks, also suggests that water covered the surface when these rocks were forming. Rover scientists presented some of that news three weeks ago as evidence that the rocks had at least soaked in mineral-rich water, possibly underground water, after they formed. Increased assurance of the bromine findings strengthens the case that rock-forming particles precipitated from evaporating water as salt concentrations climbed past saturation.

Dr. James Garvin, lead scientist for Mars and lunar exploration at NASA Headquarters, Washington, said, "Many features on the surface of Mars that orbiting spacecraft have revealed to us in the past three decades look like signs of liquid water, but we have never before had this definitive class of evidence from the Mars rocks themselves. We planned the Mars Exploration Rover Project to look for evidence like this, and it is succeeding better than we had any right to hope. Someday we must collect these rocks and bring them back to terrestrial laboratories to read their records for clues to the biological potential of Mars."

Squyres said, "The particular type of rock Opportunity is finding, with evaporite sediments from standing water, offers excellent capability for preserving evidence of any biochemical or biological material that may have been in the water."

NASA's Mars Reconnaissance Orbiter, due to launch in 2005, will survey the whole planet for sites with water-related minerals and help identify sites for future landings.

For information about the Mars rover mission, visit http://marsrovers.jpl.nasa.gov and http://athena.cornell.edu .