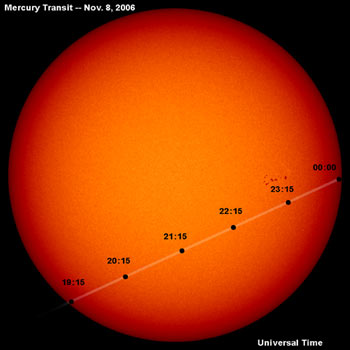 Click image to view movie.
>Multimedia Page
>Future Planet Hunt
On Wednesday, Nov 8, the planet Mercury passed directly in front the Sun. What did it look like? A picture is worth a thousand words.

From a vantage point one million miles out in space the Solar and Heliospheric Observatory (SOHO) spacecraft captured images of the planet Mercury passing directly in front the Sun of the transit. Good views could also be seen from Americas, Hawaii, Australia, along the Pacific Rim. (visibility map). The transit began at 2:12 p.m. EST (11:12 a.m. PST) and lasted for almost five hours. During the transit, Mercury's tiny disk--jet black and perfectly round--glided slowly across the face of the Sun. Only a speck of the Sun's surface is actually covered, so the Sun remains as dangerous as ever to look at. But with a proper filter or a spacecraft and a little imagination, the Transit of Mercury is a marvelous experience. + High resolution TIF image 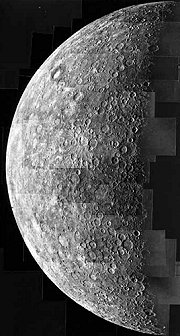 Mercury is fantastically mysterious. More than half of the planet is unknown to us. When Mariner 10 flew by in the mid-70s, it managed to photograph only 45% of Mercury's cratered surface. What lies on the other side? More craters? Or something totally unexpected? You're free to speculate, because the next spacecraft to visit Mercury, NASA's MESSENGER probe, won't enter orbit until 2011. One of Mercury's greatest secrets is the mysterious material at its poles. Radars on Earth have pinged Mercury and received a strong echo from polar craters. A favorite explanation is ice. While Mercury's daylit surface heats up to 400 deg. C, the temperature in deep, dark polar craters dips below -200 deg. C. If an icy comet landed in one of those craters (or made one of those craters), the comet's ices, vaporized by impact, might re-freeze and stick around. As skeptics like to say, however, "it's just a theory," one of many that MESSENGER will check.

Another puzzle is Mercury's wrinkles. Geologists call them "lobate scarps." Like wrinkles on a raisin, the scarps are thought to be a sign of shrinkage. Mercury may actually be collapsing in on itself as its massive iron core cools and contracts. To check this idea, MESSENGER will map Mercury's magnetic field, which springs from the core. If the core is collapsing, the collapse may leave telltale signs in the planet's magnetism. MESSENGER will also look for lobate scarps on the uncharted side of Mercury to see if this is truly a global phenomenon.

The answers are years away. Meanwhile, we watch and wonder, and Nov. 8th is a good day for that.