Phantoms From the Sand: Tracking Dust Devils Across Earth and Mars
A huge vortex of hot air was coming straight toward them, according to the LIDAR, but the video cameras saw nothing. As the research team huddled in their van, an invisible pillar of rotating air, thousands of feet high, churned relentlessly closer. The vortex seemed to stalk them as they marked its distance; first two kilometers, then one, then 500 meters.

The van shook as it was engulfed in a swirl of wind, and someone shouted "It's right on top of us!" The team burst from their vehicle, unable to contain their excitement. Shouts punctuated the dry Arizona air as they watched desert brush bend to the wind. The phantom left as quickly as it came, with Doppler wind speed measurements from the Light Detection and Ranging (LIDAR) instrument the only evidence of its passing. 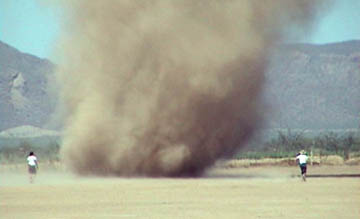 Image above: In this video by University of Michigan researcher Aimee Covert, two researchers chase a large dust devil across the Arizona desert June 8. Links to more movies of this dust devil are available at the end of this article. Credit: NASA/U. of Michigan

Click here for a 1.1 meg print-resolution version of the above image (tif format) 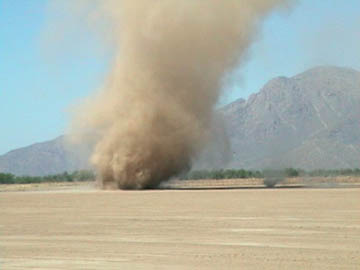 Image above: The June 8 dust devil spawns a second small dust devil to the right. Credit: NASA/U. of Michigan

The team believes they made the first Doppler LIDAR measurements of an invisible dust devil. "Some researchers think a dust devil may need dust to sustain itself, but here we recorded a very large one that was essentially free of dust for a substantial part of its lifetime," said Dr. Brent Bos of NASA's Goddard Space Flight Center in Greenbelt, Md.

Image above: Some members of the research team pose with their vehicles. Refer to the extended caption at the end of this article for their names. Credit: NASA

Bos led a team of researchers from NASA Goddard, the University of Arizona, and the Planetary Science Institute into the desert near Eloy, Arizona, June 6 to 11. The team was on an expedition to chase down and observe dust devils -- both invisible and the normal variety -- to better understand the physics that forms and sustains them and to gauge their possible hazards to explorers on Mars.

Normal dust devils are like miniature tornadoes, and are a common sight in deserts around the world. As morning Sun warms the desert ground, columns of hot air begin to rise. A column gets a spin if it encounters winds blowing in different directions at different altitudes. It feeds on hot air as it whirls across the desert, revealing its presence as it inhales sand. Its typical 25 mile-per-hour winds are mild compared to a tornado, but a large dust devil is an imposing sight, a whirling column of sand 100 feet wide and a half-mile high (30 meters wide and about a kilometer high, with winds of 40 km/hr). 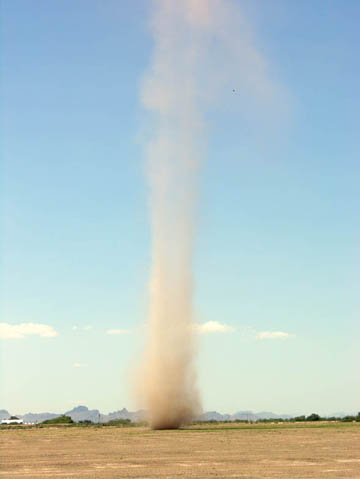 Image above: A large dust devil on June 10. Credit: NASA

Click here for a 4.9 meg print-resolution copy of the above image (jpg format)

Mars is basically a global desert, and dust devils are common on the Red Planet as well. A large Martian dust devil can easily be ten times as big as a large dust devil on Earth. This is the reason why the team camped out in a wasteland for a week. Martian dust devils pose potential hazards to human explorers, but it is unknown how significant a problem they could be. 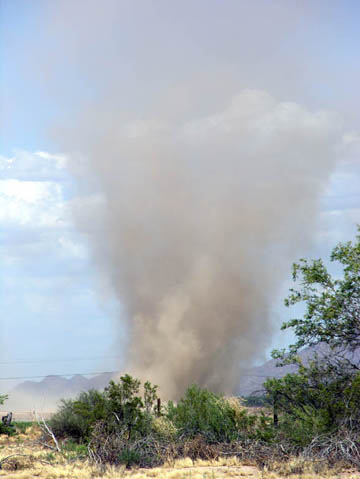 Image above: A large dust devil on June 11. Credit: NASA

Click here for a 4.8 meg print-resolution copy of the above image (jpg format)

The first possible hazard is obvious -- blowing dust could contaminate equipment and clog critical systems. Additionally, the twin Viking landers revealed that Martian dust has highly reactive chemistry. It's unknown how toxic the dust may be, but dust devils (as well as dust storms, which on Mars can engulf the entire planet) will make worse the problem of keeping it out of astronaut's lungs. The dust clings to equipment and will also stick to spacesuits. Without a method to remove the dust in an airlock, it will be tracked inside the base.

The second possible hazard was identified from the observation that dust devils on Earth are electrified. "If Martian dust devils are highly electrified also, as our research suggests, they will increase the tendency for dust to stick to space suits and equipment. They might also interfere with radio communications as the electrically charged dust grains bang into radio antennas," said Dr. William Farrell of NASA Goddard. During the campaign, Farrell jumped into his SUV and joined a fleet of vehicles that raced across the desert, chasing dust devils and occasionally driving right through them to take measurements of their electric and magnetic fields. Another truck, engineered by Dr. Steve Metzger of the Planetary Science Institute, has a fifteen-foot-high boom mounted on the front that bristles with electric, magnetic, and atmospheric sensors. 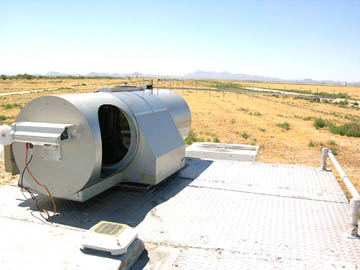 Image above: A closeup view of the LIDAR instrument. Credit: NASA

Click here for a 1.8 meg print-resolution copy of the above image (jpg format)

Dust particles become electrified in dust devils when they rub against each other as they are carried by the winds, transferring positive and negative electric charge in the same way you build up static electricity if you shuffle across a carpet. Scientists thought there would not be a high-voltage, large-scale electric field in dust devils because negatively charged particles would be evenly mixed with positively charged particles, so the overall electric charge in the dust devil would be in balance. 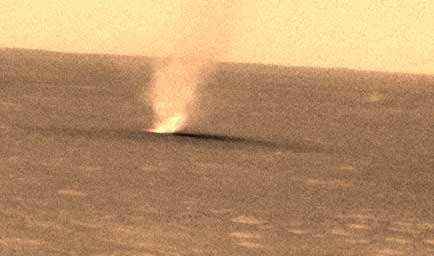 A dust devil on Mars photographed by the Spirit rover on Sol 486 (the 486th day of the Martian year). Credit: NASA

Dust devils may pose a threat by themselves, but they are also a symptom of a bigger problem - atmospheric turbulence. During the Martian day, sunlight heats the surface of Mars, which heats the air near the surface and makes it rise. Rising columns of air can knock a spacecraft off course in the same way they jolt an airplane in flight here on Earth. "When astronauts are trying to land on or takeoff from Mars, they will want to know the atmospheric conditions as accurately as possible. An instrument based on our LIDAR system will tell them," said Farrell.

This eye toward future Mars exploration is what is driving the team's research. "By observing dust devils here on Earth, we hope to get detailed requirements for an instrument that will measure them on Mars. This will give us a lot more data on Martian dust devils, so we can accurately estimate how much of a problem they will be for human explorers," said Bos.

Some members of the research team pose with their vehicles June 7. Names, from left to right:

+ More about dust devils (from Wikipedia)