In Search of Gravitomagnetism
Gravity Probe B has left Earth to measure a subtle yet long-sought force of Nature. 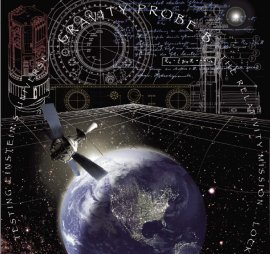 Gravitomagnetism is produced by stars and planets when they spin. "It's similar in form to the magnetic field produced by a spinning ball of charge," explains physicist Clifford Will of Washington University (St. Louis). Replace charge with mass, and magnetism becomes gravitomagnetism.

We don't feel gravitomagnetism as we go about our everyday lives on Earth, but according to Einstein's theory of General Relativity it's real. When a planet (or a star or a black hole ... or anything massive) spins, it pulls space and time around with it, an action known as "frame dragging." The fabric of spacetime twists like a vortex. Einstein tells us that all gravitational forces correspond to a bending of spacetime; the "twist" is gravitomagnetism.

What does gravitomagnetism do? "It can make the orbits of satellites precess," says Will, "and it would cause a gyroscope placed in Earth orbit to wobble." Both effects are small and difficult to measure.

Researchers led by physicist Ignazio Ciufolini have tried to detect the gravitomagnetic precession of satellite orbits. For their study, they used the Laser Geodynamic Satellites, LAGEOS and LAGEOS II, two 60 cm diameter balls studded with mirrors. Precise laser ranging of the pair allows their orbits to be monitored. The researchers did find a small amount of precession consistent (at the 20% level) with gravitomagnetism. But there's a problem: Earth's equatorial bulge pulls on the satellites, too, and causes a precession billions of times greater than gravitomagnetism. Did Ciufolini et al. subtract that huge pull with enough precision to detect gravitomagnetism? Many scientists accept their results, notes Will, while others are skeptical.

Gravity Probe B, developed by scientists at Stanford University, NASA and Lockheed Martin, will do the experiment differently, using gyroscopes. 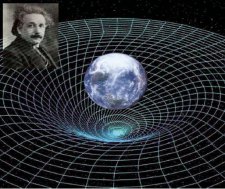 The spacecraft circles Earth in a polar orbit about 400 miles high. Onboard are four gyroscopes, each one a sphere, 1.5 inches in diameter, suspended in vacuum and spinning ten thousand times per minute. If Einstein's equations are correct and gravitomagnetism is real, the spinning gyroscopes should wobble as they orbit the earth. Their spin axes will shift, little by little, until a year from now they point 42 milli-arcseconds away from where they started. Gravity Probe B can measure this angle with a precision of 0.5 milli-arcseconds, or about 1%.

Left: An artist's concept of twisted spacetime around Earth. [More]

Any angle measured in milli-arcseconds is tiny. Consider this: One arcsecond equals 1/3600th of a degree. One milli-arcsecond is 1000 times smaller than that. The half milli-arcsecond precision expected for Gravity Probe B corresponds to the thickness of a sheet of paper held edge-on 100 miles away.

"Sensing wobbles so small is a great challenge, and scientists working on Gravity Probe B had to invent whole new technologies to make it possible.

A National Research Council panel, among them Cliff Will, wrote in 1995, "In the course of its design work on Gravity Probe B, the team has made brilliant and original contributions to basic physics and technology. Its members were among the first to measure the London moment of a spinning superconductor, the first to exploit the superconducting bag method for excluding magnetic flux, and the first to use a 'porous plug' for confining superfluid helium without pressure buildup. They invented and proved the concept of a drag-free satellite, and most recently some members of the group have pioneered differential use of the Global Positioning System (GPS) to create a highly reliable and precise aircraft landing system." 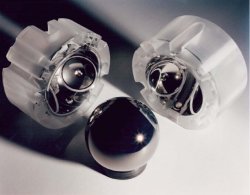 Not bad for basic research.

Right: GP-B's gyroscopes are the roundest objects ever made. Engineers at the NASA Marshall Space Flight Center polished them to within 0.01 microns (less than 40 atom-widths) of perfect sphericity. Irregularities must be eliminated; otherwise the gyroscopes could wobble on their own without help from gravitomagnetism. [More]

Physicists are both anxious and excited by Gravity Probe B. They're anxious because gravitomagnetism might not be there. Einstein's theory could be wrong (a possibility held unlikely by most), and that would spark a revolution in physics. They're excited for the same reason. Everyone wants to be on hand for the next great advance in science.

Near Earth, gravitomagnetism is weak. That's why the Gravity Probe B gyroscopes wobble only 42 milli-arcseconds. But gravitomagnetism could be powerful in other parts of the Universe--for instance, "near a spinning black hole or a neutron star," says Will. A typical neutron star packs more mass than the Sun into a ball only 10 km wide, and it spins a hundred thousand times faster than Earth. The gravitomagnetic field there could be very strong.

Astronomers might have already observed the effects of gravitomagnetism. Some black holes and neutron stars shoot bright jets of matter into space at nearly light speed. These jets come in pairs, oppositely directed, as if they emerge from the poles of a rotating object. Theorists think the jets could be powered and collimated by gravitomagnetism. 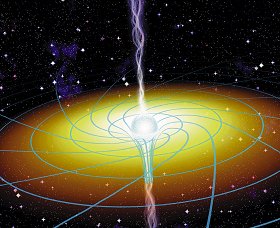 In addition, black holes are surrounded by disks of infalling matter called "accretion disks," so hot they glow in the x-ray region of the electromagnetic spectrum. There's mounting evidence, gathered by X-ray telescopes such as NASA's Chandra X-ray Observatory, that these disks wobble, much like the gyroscopes on Gravity Probe B are expected to do. Gravitomagnetism again? Perhaps.

Here in our solar system gravitomagnetism is, at best, feeble. This raises the question, what do we do with gravitomagnetism once we've found it? The same question was posed, many times, in the 19th century when Maxwell, Faraday and others were exploring electromagnetism. What use could it be?

Today we're surrounded by the benefits of their research. Light bulbs. Computers. Washing machines. The Internet. The list goes on and on. What will gravitomagnetism be good for? Is it just "another milestone on the path of our natural quest to understand nature?" wonders Will. Or something unimaginably practical? Time will tell.