Auroras Spotted from Space
Aurora were visible as far south as Florida Thursday night after a coronal mass ejection (CME) was hurled into space by sunspot 484. That's one of the same active regions that produced massive solar flares just two weeks ago that were aimed at Earth. It is now rotating back around toward Earth and more flares are expected.

The Polar spacecraft is currently flying around the south pole and saw this aurora form after a CME brushed past Earth. Click on images for movies (movies are 9 MB to 25 MB) Credit: NASA / University of Iowa

A spectacular aurora also formed over the Antarctic regions November 20 beginning at 8:00 UT (3:00 a.m. Eastern Time). The impact of the massive blast of plasma caused our planet's magnetic field to ring like a bell, forming this special kind of aurora called a "pressure pulse" aurora. The aurora, also known as the Northern and Southern Lights, form when solar particles and magnetic fields pump energy into the Earth's magnetic field, accelerating electrically charged particles trapped within. The high-speed particles crash into Earth's upper atmosphere (ionosphere) over the polar regions, causing the atmosphere to emit a ghostly, multicolored glow.

The strongest aurora are formed when the magnetic field carried by a cloud of gas from the Sun has a direction oriented opposite to the direction of the Earth's magnetic field. The Earth's field points northward, and, in this case, the cloud's field was aligned strongly southward, producing an intense aurora. If the cloud's magnetic field remains southward at it passes the Earth, an aurora may form in the evening of Nov. 20 over the Northern hemisphere as well, perhaps progressing far enough southward to be seen over heavily populated regions. 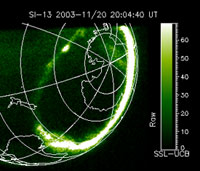 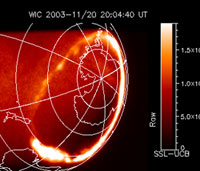 These images were made by NASA's Polar and IMAGE spacecraft, using the Visible Imaging System (VIS) instrument and Far Ultraviolet Imager respectively. Both instruments on the two spacecraft make pictures from ultraviolet light emitted during an aurora. Ultraviolet light is invisible to the human eye, but can be detected by special instruments, which make false color images like the ones here for scientists to analyze. In a pressure pulse aurora like this, the aurora starts at the point over the Earth closest to the Sun, which is Noon local time. It then spreads out around the globe in opposite directions, towards the dawn and dusk regions. The two portions of the aurora finally meet on the opposite side of the planet, where it is midnight local time, forming a ring. 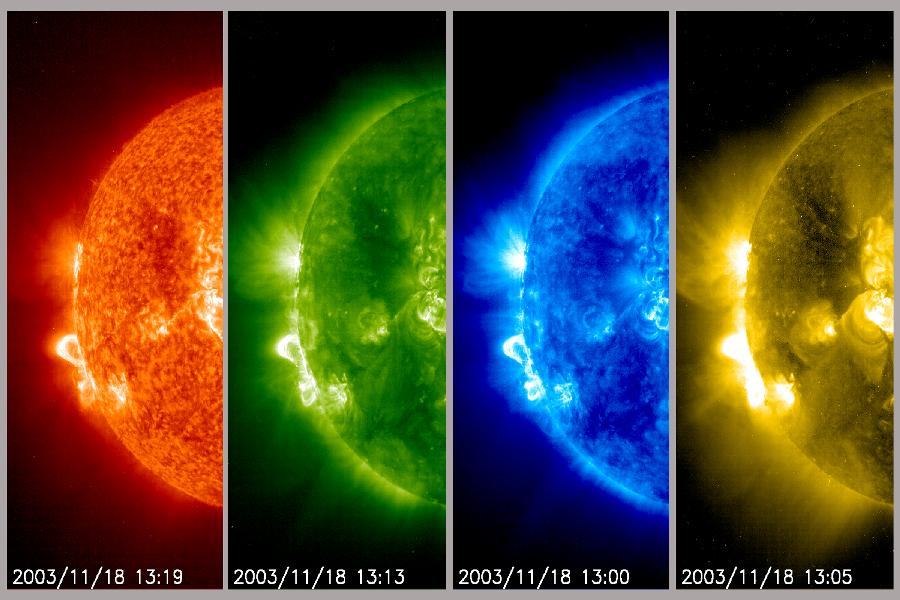 After their last rotation across the Sun as the very large and powerful Active Regions 486 and 488, these two spots are just now appearing again in profile on the Sun's edge. Judging by the level of solar activity that was detected on the far side of the Sun while they were there, one can expect that they will bring more space weather this time around as well. Just how much is the unanswered question.