At 20 times the size of Earth, the largest sunspot observed since the fall solar storm onslaught is now pointed directly at Earth. Its unusually large size also means that it's now visible with the naked eye (although you should never look at the Sun without a proper filter). The implications of this spot have scientists on the edge of their seats - if the active region generates coronal mass ejections (CMEs), massive explosions with a potential force of a billion megaton bombs, it will be a fairly direct hit to Earth and its satellites and power grids. 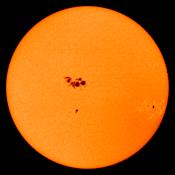 Right: A view from the Michelson Doppler Imager (MDI) instrument on the SOHO spacecraft. It's a helioseismology instrument that analyzes the vibrational modes of the Sun as well as the Sun's magnetic field. Click on image for movie. Credit: NASA/ESA

The last large solar events occurred in the fall of 2003 when about 17 major flares erupted on the Sun. In this case, the region (AR 10652) has generated several medium-sized flares and CMEs over the past three and a half days. These views are from the SOHO spacecraft's MDI and EIT instruments, respectively. The EIT view shows the active regions churning out massive amounts of magnetically confined plasma in small blasts. Over the next few days, the region has the potential for unleashing more and larger solar storms. 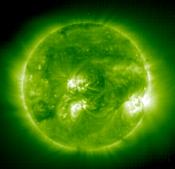 Left: Full-disk view of the Sun with SOHO's Extreme ultraviolet Imaging Telescope (EIT). The bright active regions are the source for flares and CMEs. Click on image for movie. Credit: NASA/ESA

The Solar and Heliospheric Observatory (SOHO) is located in an orbit approximately one million miles from Earth in order to gain an unobstructed view of the Sun. It carries 12 instruments and is a joint NASA / European Space Agency (ESA) mission.