A Tangle of Filaments 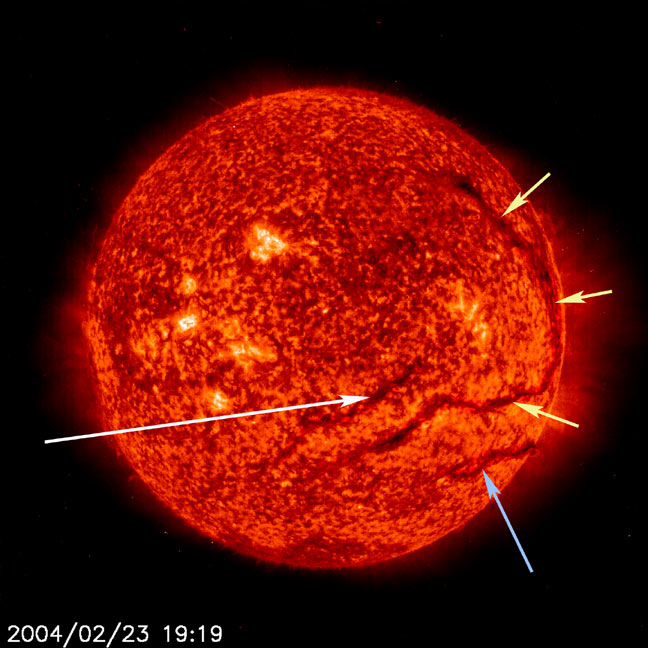 Arrows point to dark filaments, or condensations of cooler material in the Sun's corona, its hot, tenuous outer atmosphere. Click on the image for a video clip that shows the Sun from other instruments on SOHO. First, a white light image taken by the MDI instrument shows sunspots clearly, followed by an EIT image showing 1.5 million degree coronal plasma, in which the subtly darker filaments can be discerned. Finally, an EIT image showing gas at a temperature between those in the visible coronal images reveals the full extent of the filaments. Print resolution versions Credit: NASA/ESA

A careful look at the Sun in extreme ultraviolet (EUV) light shows a series of three filaments slanting up roughly at a 45 degree angle in the lower right quadrant of the Sun on Feb. 23, 2004. The Solar and Heliospheric Observatory (SOHO) spacecraft, about a million miles between the Earth and Sun, caught this view with an EUV telescope. The image's contrast has been enhanced to make the dark filaments easier to pick out.

Filaments are twisting masses of cool, dense clouds of gas which hang in the hot, thin corona (upper atmosphere of the Sun where flares erupt). Called prominences when they occur on the limb, or edge of the Sun, most of the material in filaments is about 60,000 degrees Kelvin, as opposed to the solar corona, which is much hotter (1.5 million degrees Kelvin). Filaments look dark because we see them projected against the bright solar surface and look down on them; prominences look bright because they are seen from a side-view against the dark sky.

The long, curling, central filament, if straightened out, would appear to be able to span the diameter of the Sun, over 1.6 million km (one million miles). Sometimes these filaments collapse and erupt, although these three have remained stable for the past several days.

SOHO is a joint mission between NASA and the European Space Agency (ESA).