Having marked its first anniversary on orbit, NASA's Solar Radiation and Climate Experiment (SORCE) satellite has hit its stride. In concert with other satellites, SORCE observations of the Sun's brightness are helping researchers to better understand climate change, climate prediction, atmospheric ozone, the sunburn causing ultraviolet-B radiation and space weather.

SORCE recorded the most comprehensive dataset ever of the total solar brightness decrease by a whopping 3 tenths of one percent during the period of record-setting solar flares in October/November. Click on still for movie (7 MB). Credit: NASA/ESA/LASP

In the fall of 2003, SORCE was fortunate to see and measure the exceptionally high levels of solar activities. In late October and November the Sun sent solar flares and coronal mass ejections hurtling Earthward, disrupting satellites and other transmissions, triggering an intense geomagnetic storm, enabling the northern lights to be seen as far south as Arkansas, Texas and Oklahoma. 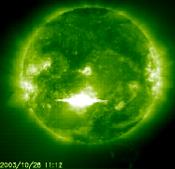 On Oct. 28 spacecraft tracked an X-17.2 sized flare, the second largest ever observed by SOHO. It arrived early the next day, meaning it was unusually fast too. The same spot blasted off one more flare Nov. 4 as the Sun rotated away. This one was X-28, making it the most powerful X-ray flare ever recorded. Click on image for movie. Credit: NASA/ESA

The spacecraft recorded unusual data from the massive record-setting solar flares in late October/November 2003. The most powerful flares ever observed in X-rays, including the absolute largest, were accompanied by large sunspots which produced a complex change in energy output; SORCE saw total solar brightness decrease by 3 tenths of one percent. To put that into perspective, the last time Earth experienced that sort of decrease, drastic climate change occurred and Earth experienced the "Little Ice Age." Of course, that 3 tenths of one percent lasted 50 years while this decrease lasted a week.

Only about 70% of the solar energy that reaches Earth is absorbed, while the other 30% is reflected back into space by atmosphere and aerosols, ocean/land and clouds. Click on image for movie (9.3 MB). Credit: NASA

Having accurate knowledge of the Sun's brightness variations on all time scales from flares to centuries - at all wavelengths that are heating the Earth's atmosphere, land and oceans is an essential step to understand, model and predict impacts of the Sun on Earth. Two of the SORCE instruments - the Total Irradiance Monitor (TIM) and the Spectral Irradiance Monitor (SIM) instruments - will ultimately be part of the operational measurements made by the National Polar-orbiting Operational Environmental Satellite System (NPOESS) satellites beginning in 2013. Solar irradiance has been monitored since the 1970s in order to create a long-term record for study.

The SORCE spacecraft was launched Jan. 25, 2003 and a joint mission with the University of Colorado in Boulder. Click on image for animation (9.6 MB). Credit: NASA/LASP

This mission is a joint partnership between NASA and the University of Colorado Laboratory for Atmospheric and Space Physics (LASP) in Boulder, Colo. As a principal investigator led mission, NASA provided management oversight and engineering support. Scientists and engineers at the University of Colorado designed, built, calibrated, and tested the four science instruments on the satellite. The Mission Operations Center and the Science Operations Center are both located at the University.

More information about the SORCE mission: