Measuring Up to a Solar Sail
Solar sails.

The idea of using these large, reflective structures to "sail" through space is nothing new. In fact, it's been around for a long time -- first suggested nearly 400 years ago by the German astronomer Johannes Kepler, after he "discovered" comet tails being blown by what he believed to be a kind of solar breeze. Kepler suggested ships could possibly move through space using large sails to capture this "breeze" from the Sun, much the way the wind pushes sailboats across water on Earth.

Fast forward to today, and NASA has taken the solar sail idea past the drawing board and into development and testing.

But before we get to the testing, what exactly is a solar sail, how does it work, and how large is "large?" First, the definition, and how it works: 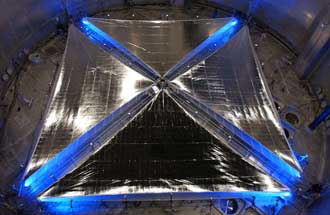 Solar sails are giant, flat sheets of very thin, reflective material -- 40-to-100 times thinner than a piece of writing paper -- supported by an arrangement of lightweight booms or masts. The sails reflect sunlight, which provide the force needed to push a spacecraft through space, without using any fuel. This sunlight pressure also provides enough thrust to allow such maneuvers as hovering at a fixed point in space and rotating the vehicle's position in orbit -- moves that would require a significant amount of fuel for conventional rocket systems.

Over the last few months, the two companies have been putting finishing touches on their system designs. But long before now, both had to "grow" a little to handle the large structures.

L'Garde engineers moved the design, manufacture, assembly and testing of its sail system design into a state-of-the-art facility in late 2004. The building can accommodate a fully deployed, or opened, 20-meter solar sail and boom system with room to spare. Workers wear protective gear, such as hair and shoe nets, lab coats and latex gloves, to protect the hardware from unwanted contaminants or residues, such as a loose hair, food crumbs or "sticky fingers." ATK Space Systems-Goleta has its own high-tech facility for the assembly and testing of its 20-meter solar sail and boom system design. The company leased and modified the building in 2004 to handle the large structures and to meet their testing needs. 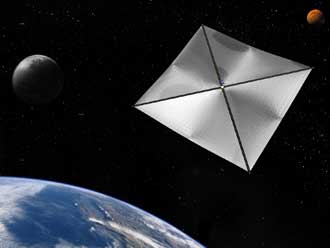 Image to right: In an artist's rendition, a four-quadrant solar sail propulsion system, complete with payload, hovers at a fixed point in space in Earth orbit. Image credit: NASA/MSFC

Protective clothing also is a must for ATK's engineers to keep the lab area as clean as possible. For both companies, a key practice while working on their solar sail and boom systems is, "handle with care."
So how can you get such a large system into space?

For L'Garde and ATK Space Systems, the answer is found in a "box" about the size of a suitcase. Each company developed a lightweight, compact stowage container from which the solar sail and boom system is deployed, via remote control. The container is attached to a spacecraft, which is launched by rocket into space.

NASA is testing both 20-meter solar sail system designs at Glenn Research Center's Plum Brook facility in Sandusky, Ohio, from April to July. The tests are being conducted in Plum Brook's Space Power Facility -- the world's largest space environment simulation chamber, which simulates the vacuum and temperature extremes of space. ATK Space Systems-Goleta began its tests in April, while L'Garde's testing begins in June. Each test series is expected to last up to 30 days. NASA's Langley Research Center will provide structural models and instrumentation for each company's test series.

Solar sail technology was selected for development in August 2002 by NASA's Science Mission Directorate in Washington. Along with sail system design projects by L'Garde and ATK Space Systems-Goleta, NASA's Jet Propulsion Laboratory in Pasadena, Calif., was tapped to develop an integrated set of computer-based solar sail simulation tools. These are just three of a number of efforts undertaken by NASA Centers, industry and academia to develop solar sail technology.

Solar sail technology is being developed by the In-Space Propulsion Technology Program, managed by NASA's Science Mission Directorate and implemented by the In-Space Propulsion Technology Office at the Marshall Space Flight Center. The program's objective is to develop in-space propulsion technologies that can enable or benefit near or mid-term NASA space science missions by significantly reducing cost, mass and travel times.