NASA Develops Robust Artificial Intelligence for Planetary Rovers
NASA is planning to add a strong dose of artificial intelligence (AI) to planetary rovers to make them much more self-reliant, capable of making basic decisions during a mission.

In the past, very simple artificial intelligence systems on board rovers allowed them to make some simple decisions, but much smarter AI will enable these mobile robots to make many decisions now made by mission controllers.

"Human beings make decisions in response to their environment. How do you encapsulate this behavior into a rover, or a robot, sitting on a planet millions of miles away? That's what we are working on," said Kanna Rajan, a computer scientist at NASA Ames. "We want to put software on rovers to give them the capability to be artificially intelligent," Rajan explained.

Large teams of human beings on Earth direct the Mars Exploration Rovers (MER) now rolling across the martian terrain to look for evidence of water. It now takes the human-robot teams on two worlds several days to achieve each of many individual objectives.

"It takes about three days for a MER rover to visualize a target, get to the target and do some contact science," said Rajan. "Part of the problem is we are not closing the loop on board the rover. Signals from the rover have to go to Earth for a human with his/her cognitive capacity to deliberate on the information in the signal and make a decision. Based on that decision, a signal goes back to Mars to instruct the rover to take pictures or do other work," Rajan noted. 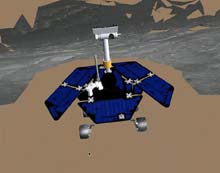 A robot equipped with AI, on the other hand, could make an evaluation on the spot, achieve its mission faster and explore more than a robot dependant on decisions made by humans on Earth. Today's technology can make a rover as smart as a cockroach, but the problem is it's an unproven technology, according to Rajan.

"The way new space technology is generally proven is to have field tests here on Earth -- to have an Earth analog mission," Rajan explained. "You take a rover -- similar to the ones on now exploring Mars -- to a location that resembles the martian terrain here on Earth, and you simulate the entire mission, but you also install an AI capability on the rover to take over decision-making that would normally be done by human beings."

"State-of-the-art artificial intelligence software will deliberate on board the rovers. One such state-of-the-art, complex, AI-based agent software is based on an ambitious architecture called Intelligent Deployable Execution Agents, or IDEA, developed at NASA Ames over the last 4 years,'" Rajan explained. An agent is software that mimics the human thought process to do things a human being wants to be done.

"What we expect to do within the next 10 years is to not only deploy one AI-based rover, but a collection of rovers using the AI-based IDEA architecture, which cooperatively perform tasks orders of magnitude more complex than the MER rover, and do it in a much more robust way," Rajan predicted.

Using surveying instruments, teams of robots may well be able to map large tracts of the surface of Mars, according to Rajan, who said there are many reasons to use a large robot team. "One reason is better coverage of a large area of land. Another reason is redundancy; if one or more of the robots fails, you still can accomplish the mission. Also, a team could do complex tasks that a single rover could not do. Better science results from a team effort, whether it is by robots, humans or even a robot-human team," Rajan said.

Robotic spacecraft may also fly in 'swarms,' or teams, to make scientific observations of planets, moons and other celestial objects, according to Rajan.

"Creating strong AI software is a very exciting and challenging problem, and it inspires us and our students to work on this bold effort," said noted artificial intelligence expert professor Milind Tambe of the University of California, Los Angeles, who has worked with Rajan. Tambe explained that AI research inspires the next generation of computer scientists because when they hear about NASA AI work, "their eyes light up, and then they understand what this research could mean for the future."