NASA Developing Robots with Human Traits
Will robots that help astronauts in space be as friendly and likeable as fictional "Star Wars" droid "R2-D2"?

NASA researchers envision futuristic robots that 'act' like people to enable these mechanical helpers to work more efficiently with astronauts.

"Our goal is not for robots to have the same 'thought process' as humans, but rather for them to act, respond and interact more 'naturally' in ways that humans do with other humans," said Illah Nourbakhsh, a scientist who leads a group developing human-robot teams at NASA Ames Research Center, located in California's Silicon Valley. 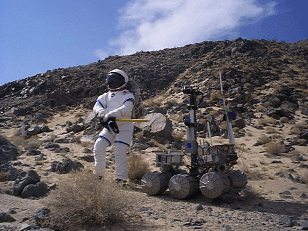 A second area that NASA Ames researchers will develop is to build robots that have reasoning mechanisms that work similarly to human reasoning. "Of primary interest is making the human and robot understandable to each other," Nourbakhsh said. "We believe that by building robots with reasoning mechanisms and representations that are similar to what humans use, we can make human-robot interaction more natural and human-like," Nourbakhsh explained.

Thirdly, the researchers will conduct field tests of people and robots working together.

The robots will help assemble buildings, test equipment, weld structures and dig with small tools. Human-robot teams will use a checklist and a plan to guide their joint efforts, according NASA Ames scientist Terrence Fong. Human beings and robots will use "partner-to-partner" interaction to share information and to support one another. "It is the way human construction and maintenance crews frequently operate," Fong explained. 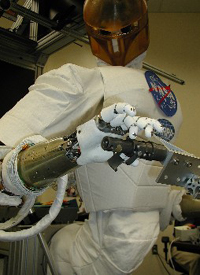 "Teams will include humans and robots working in close quarters as well as humans controlling and interacting with robots over medium distances and from ground control," Nourbakhsh predicted.

"Conventional human-robot dialogue is limited to 'master-slave' commanding and monitoring," Fong said, speaking of how robots generally have been controlled to date. "As a result, system performance is strictly bound to the operator's skill and the quality of the (computer) user interface."

The system under development at NASA Ames will enable robots to interactively support one another so that they "can quickly jump in and help the other (human or robot) resolve issues as they arise," Fong continued. NASA Ames researchers at first will focus on developing technologies that will enable robots to operate more like human beings during construction and maintenance tasks. These technologies will be evaluated on robotic test beds, including Robonaut, a humanoid robot that project collaborators at NASA Johnson's Robot Systems Technology Branch designed.

Robots have worked as field geologists during previous field tests, but in the future, these human-like machines will also do non-scientific work. They will not only look for raw materials on planets, but also process those materials, according to researchers. Other robot jobs may include scouting, surveying, carrying equipment, inspecting and maintaining machines and habitats. Androids could well serve as field medics, monitoring, helping and transporting injured astronauts.

Human-robot teams must be reliable, survivable, reusable and low-cost, according to scientists, who hope to enable robots to receive general commands, such as, "inspect habitat." The human-like machines would then autonomously perform tasks and seek help only when they encounter problems they cannot solve by themselves.

"A challenge that scientists face is enabling robots to perform tasks on their own as much as possible, and giving these androids the ability to ask for human help and knowledge only when necessary," observed Fong.

Two robot characteristics are that these machines will communicate by speaking and gesturing. In places with little or no atmosphere, sound cannot travel well, and without radio communications, a gesture might be the most practical way for a robot and a human being to communicate, according to researchers.