Limber Robot Might Hitchhike to Space
Lemurs, those wide-eyed, active, monkey-like animals running around the island in the movie "Madagascar," are known for their ability to leap. A robotic lemur being tested at NASA's Jet Propulsion Laboratory moves more slowly, but might someday take its own giant leap - by going into space with astronauts. 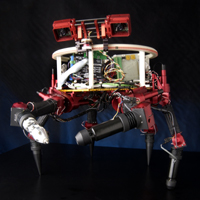 "Lemur," short for the Limbed Excursion Mechanical Utility Robot, was originally conceived to help maintain future spacecraft and space stations. It weighs in at just 26 pounds (12 kilograms) and is small enough to hitch a ride on the space shuttle or NASA's planned crew exploration vehicle.

"Lemur could be an astronaut's pet monkey," says JPL engineer Brett Kennedy, principal investigator for the robotic project. "It can perform tasks that are too small for astronauts to do easily. It's built to get into the nooks and crannies of a structure."

To make Lemur flexible and versatile, Kennedy and his team combined the body styles and abilities of an octopus, a crab and a primate into a six-limbed robot with Swiss army knife tendencies. Attachable tools fit onto each limb and perform a variety of functions. Lemur can support itself evenly on three legs while two other limbs are freed up to work. And the sixth limb? "It's a bonus, and besides, five limbs would look funny," Kennedy says.

Since there's no gravity in space, Lemur could work upside down, as long as one limb is anchored. Astronauts could instruct Lemur to perform simple fixes inside or outside a spacecraft, eliminating the need for a human spacewalk.

Lemur's circular body enables it to move in any direction. Its "eyes," two stereo cameras on a circular track mounted on top, can swivel freely, which means the base of the robot doesn't have to rotate. "It saves time, because we can turn the cameras in the direction we want to move and then go," explains Kennedy. Lemur also has a palm-sized camera that doubles as a microscope.

In JPL test labs, Lemur has already learned some impressive tricks. For example, one limb has fastened a screw into a structure, with another limb shining a flashlight on the operation. In one experiment, engineers attached an ink pen to one of Lemur's limbs and developed a set of computer programs to teach the robot how to write its name.

With all its gadgetry and talents, Lemur might have a bright future not only as an assistant astronaut, but also as a Martian rock climber. Lemur could scamper up much steeper hills and cliffs than the Spirit and Opportunity rovers that are currently wheeling around on Mars. "We built Lemur with limbs so it can use both arms and legs just as a biological primate would," Kennedy said.