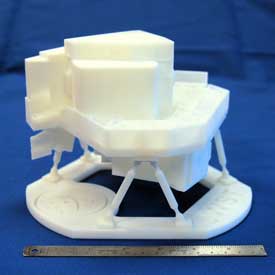 Image/movie right: This is a photo of a 1/6-scale plastic model of the Fine Guidance Sensor instrument. Click image to view movie. Credit: Canadian Space Agency

COM DEV, Ottawa, Canada, has been given the approval to build the instrument that includes both the Fine Guidance Sensor (FGS) and the Tuneable Filter Imager (TFI) camera for the telescope. The company is a leading global designer and manufacturer of space hardware subsystems and their Space Science division has been working on the design and engineering phases of the project since 1998.

"Our partnership with the Canadian Space Agency will help to ensure that the Webb telescope becomes the international scientific resource that we fully expect it to become. The Canadian FGS and TFI that are being built by COM DEV will not only provide the essential pointing capability for the telescope, but will also provide unique science capabilities," said John Decker, deputy associate director of the James Webb Space Telescope Project at NASA's Goddard Space Flight Center, Greenbelt, Md.

The Fine Guidance Sensor will track the positions of guide stars with great accuracy to keep the telescope pointed precisely while its instruments make scientific measurements. The level of precision required will be the equivalent of focusing on an object the size of a dime at a distance of 1000 kilometers (more than 600 miles) away. TFI will provide a unique infrared imaging and planet finding capability for the Webb telescope. 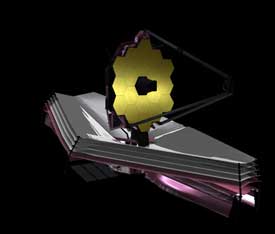 Image left: This is an artist's rendition of the James Webb Space Telescope. Credit: NASA

The Canadian Space Agency (CSA) plays a pivotal role as the funding agency and project coordinator for the Webb telescope project in Canada.

"The space industry plays a key role within Canada’s science and technology sector, and space ventures such as the Webb telescope bring challenges so demanding and so complex that they constantly push industrial and technological standards to the limit," said Gary Goodyear, Member of Parliament for Cambridge, on behalf of the Minister responsible for the CSA. CSA's contribution guarantees Canadian scientists access to all data and allow them to formulate requests for a minimum of 5% of the time on the space telescope for studies that would best serve their research.