NASA Is Not Giving Up On Hubble!
Looking for Creative Ways to Extend Observatory's Life
How do you extend the life of an orbiting space telescope without sending astronauts to fix it? This is the very question that NASA's most creative engineers are pondering these days.

The tragic loss of the Shuttle Columbia last year, and the recommendations of the Columbia Accident Investigation Board (CAIB), led NASA Administrator O'Keefe to give the Hubble Space Telescope team an enormous challenge -- determine whether a robotic mission is possible and how it could potentially extend the useful life of Hubble. The outcome of this challenge could also provide new capabilities in human-robotic exploration for the Vision for Space Exploration. 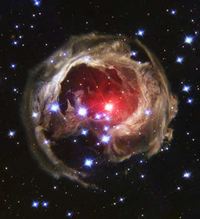 Right: View of an expanding halo of light around a distant star, V838 Monocerotis (V838 Mon). It was obtained with Hubble's Advanced Camera for Surveys on Feb. 8, 2004. V838 Mon is located about 20,000 light-years away from Earth at the outer edge of our Milky Way galaxy. More information. Credit: NASA/STSCI

No further Shuttle servicing of Hubble

Among its recommendations, the CAIB called for various improvements to the Shuttle fleet before it can return to flight, as well as other measures that need to be adopted over the long term.

One lesson NASA learned from Columbia is that astronauts need a place to take shelter if their Shuttle is damaged. On a Hubble mission, unlike a mission to the International Space Station (ISS), there would be no such refuge for astronauts.

To rescue a Shuttle crew performing a Hubble servicing mission, NASA would need to have a second Shuttle positioned for launch, requiring an unprecedented double workload for ground crews. Then there's the issue of the rescue itself. To do this would involve a Shuttle-to-Shuttle crew transfer, which is something NASA has never before attempted. All this would have to be done under extreme schedule pressure because the Shuttle's life support, food and water resources are extremely limited.

A mission to the ISS, however, would allow astronauts from a damaged orbiter to take safe shelter, giving NASA more time, more options and greater capabilities to mount a rescue. 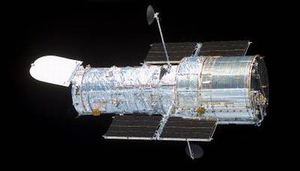 Left: A view of Hubble from astronauts in April 2002, during the fourth servicing mission to replace technologies on the telescope. Credit: NASA

What about a robotic servicing mission?

How can Hubble safely be de-orbited without a Shuttle mission? And is it possible for a robot to actually upgrade Hubble? The answers may lie in recent advancements in robotics technology. Engineers from around NASA, led by a team at the NASA Goddard Space Flight Center, are currently looking into several promising scenarios.

First and foremost, engineers are working on a plan to safely dispose of Hubble once it concludes its scientific mission. Satellites in low Earth orbit eventually fall back to Earth, and Hubble will share that fate perhaps as soon as 2013 if nothing is done to boost its orbit and keep it in space. The biggest problem -- Hubble is the size of a large school bus and it has no propulsion system that could be used to guide it down safely into the ocean once its scientific mission is over. NASA can't just let it fall to Earth unguided since it passes over many populated areas, so engineers need to design a robotic propulsion system that could be launched on an expendable rocket and attached to the bottom of the telescope. Ground controllers could then control the re-entry and direct Hubble to a safe splash-down far from any populated areas.

This same team of engineers is also considering ways to effectively replace or repair the observatory's aging hardware and perhaps even its scientific instruments. The most important are the batteries, which should last until maybe late 2007 or early 2008. Engineers think it may be possible to send a robot that could attach itself to Hubble and plug a new set of batteries into the telescope. How could robots do that? Keep in mind that Hubble was designed so that astronauts could do things like change equipment, computers, and other components, so if a robot could be designed that could turn the same bolts and open latches and other tasks, maybe it could be done.

Other things like gyroscopes -- which point Hubble at stars and far-away galaxies very precisely -- and instruments would present some pretty big challenges for any robot to replace on Hubble. Perhaps it's possible, but no one said it will be easy!

The good news is that a lot of amazing new robotic technologies have come along in the past few years, and some show promise that they might be able to do at least some of the things we would like to do on Hubble.

As NASA considers ideas for safely extending and completing Hubble's mission, experts in the nation's scientific and engineering community are also being asked to help. NASA formally requested a study by the National Research Council to ensure all reasonable alternatives for extending the lifetime of this national asset have been fully considered.

Meanwhile, the observatory continues to provide us with unparalleled views of the universe, complementing the capabilities of the Chandra and Spitzer telescopes also on orbit. Together with the upcoming Kepler and James Webb Space Telescopes, as well as an array of astronomical observatories on the ground, we will continue to increase dramatically our knowledge of the universe in which we live. So stay tuned!