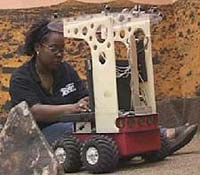 What motivated a pretty young girl from Providence, R. I. to grow up to specialize in artificial intelligence? The "Bionic Woman," her all-time favorite TV series.

"I love what I do, I love the work and I love the hands-on experience," said award-winning Dr. Ayanna Howard of NASA's Jet Propulsion Laboratory in California.

Image Left: Ayanna Howard has a doctorate in electrical engineering from the University of Southern California, specializing in artificial intelligence and robotics. She has worked at JPL since 1993. Credit: NASA/JPL

Howard is part of a team of NASA scientists who are developing a way for robots to use their own "brains."

For now, nearly all of today's robots are only able to perform actions that are written into their software or transmitted by an Earth-bound human.

How could a robot make a human decision? Howard and the team are working on two concepts in the field of artificial intelligence called "fuzzy logic" and "neural networks" to answer that question.

Fuzzy logic is closer to the way our brains work, and its approach to problems duplicates how a person would make decisions.

A neural network is a processing device for solving a problem in a number of steps based on the way a human brain functions. A feature of neural networks will allow a robot to choose behaviors based on its surroundings, much like humans do, and then remember its actions. 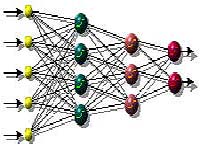 Image right: In this simple example of a neural network signals are fed into the yellow layer, pass through the two processings layers, then emerge on the right as output signals. Modeled after the human brain, in several interconnected elements process information simultaneously, adapting and learning from past patterns. Credit: NASA

In simple terms, when the robot encounters a large rock it will know to go around the rock "instinctively" instead of having a human "driver" steer it.

"Our job is to help the robots think in more logical terms about turning left or right, not just by how many degrees," Howard said.

The research team is now working on the "smarts" for the Mars Technology Program, with a new mission slated for launch in 2011. During this mission, a test Lander will drive itself on the red planet's surface without human interaction. 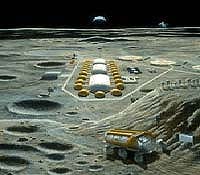 With all of the hours spent in her chosen profession, Dr. Howard still finds time to share her career with the community. She finds it especially rewarding to speak to young girls and encourage them to take math and science classes in school to prepare them for a future in technical fields.

Image left: When humans someday colonize the Moon and other planets, "thinking" robots will be an invaluable tool for helping people explore the new terrain. Credit: NASA/JPL

Even before the Vision for Space Exploration was a reality, Dr. Ayanna Howard, the "bionic woman" of JPL, was thinking, dreaming and planning for the years ahead. "You must have imagination to go to the next level," she said.

Dr. Ayanna Howard explains how engineers design and test rovers that may one day go to Mars.
+ View Video