The latest spacecraft sent to us is more a living thing than a robot. Shortly after launch from Earth, the tiny capsule blossomed into a sail and rode the solar wind to Mars. On the way, a meteoroid punched a hole in the sail, but surrounding material flowed in and closed the tear. Upon arrival, the spacecraft shrunk more than 100 times its volume to return to the safety of its capsule. After the capsule took the heat from entry into the Martian atmosphere, the thing emerged again, forming a parasail to float gently to the Martian surface, covering the rocks like a blanket. Now it moves like a giant amoeba over the rugged terrain, flowing around large rocks and over small ones, and growing stalks that carry instruments. Yesterday, it found evidence of an ancient sea. It grew an antenna and transmitted the observations to an orbiting spacecraft, which relayed the data to our Martian base. In a few weeks, we'll mount an expedition for a closer look at the area…

Engineers at NASA's Goddard Space Flight Center in Greenbelt, Md., took the first step toward this scenario with the successful test of a shape-shifting robotic pyramid. As the engineers watched like anxious new parents, the robot pyramid traveled across the floor of a lab at NASA Goddard. Robots of this type will eventually be miniaturized and joined together to form "autonomous nanotechnology swarms" (ANTS) that alter their shape to flow over rocky terrain or to create useful structures like communications antennae and solar sails. 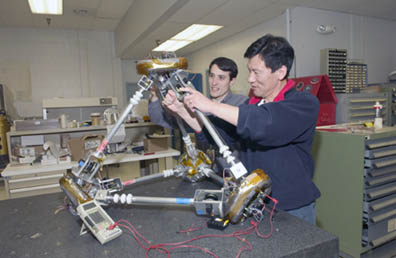 The robot is called "TETwalker" for tetrahedral walker, because it resembles a tetrahedron (a pyramid with 3 sides and a base). In the prototype, electric motors are located at the corners of the pyramid, which are called nodes. The nodes are connected to struts which form the sides of the pyramid. The struts telescope like the legs of a camera tripod, and the motors in the nodes are used to expand or retract the struts. This allows the pyramid to move: changing the length of its sides alters the pyramid's center of gravity, causing it to topple over. The nodes also pivot, giving the robot great flexibility. 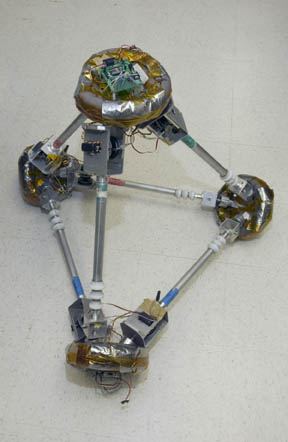 Image above: The TETwalker prototype makes its way across a lab floor at NASA Goddard. Image Credit: NASA Click here for a 1.3 meg print-resolution version of this image

Click here for a 20 meg movie of future TETwalker concepts

In January, 2005, the prototype was shipped to McMurdo station in Antarctica to test it under harsh conditions more like those on Mars. The test indicated some modifications will increase its performance; for example, placing the motors in the middle of the struts rather than at the nodes will simplify the design of the nodes and increase their reliability.

Images left and right: The TETwalker prototype being tested at McMurdo station in Antarctica. Image Credit: NASA and the National Science Foundation

The team anticipates TETwalkers can be made much smaller by replacing their motors with Micro- and Nano-Electro-Mechanical Systems. Replacement of the struts with metal tape or carbon nanotubes will not only reduce the size of the robots, it will also greatly increase the number that can be packed into a rocket because tape and nanotube struts are fully retractable, allowing the pyramid to shrink to the point where all its nodes touch.

These miniature TETwalkers, when joined together in "swarms," will have great advantages over current systems. The swarm has abundant flexibility so it can change its shape to accomplish highly diverse goals. For example, while traveling through a planet's atmosphere, the swarm might flatten itself to form an aerodynamic shield. Upon landing, it can shift its shape to form a snake-like swarm and slither away over difficult terrain. If it finds something interesting, it can grow an antenna and transmit data to Earth. Highly-collapsible material can also be strung between nodes for temperature control or to create a deployable solar sail.

Additionally, the nodes will be designed to disconnect and reconnect to different struts. If a meteoroid or rough landing punches a hole in the swarm, the system can heal itself by rejoining undamaged nodes. "Spacecraft are so expensive because failure in a single component can cripple the entire spacecraft, so extensive testing and redundant systems are employed to reduce the chance of catastrophic failure. We wouldn't live long if our bodies worked like this. Instead, when we get hurt, new cells replace the damaged ones. In a similar way, undamaged units in a swarm will join together, allowing it to tolerate extensive damage and still carry out its mission," said Curtis.

The pyramid shape is also fundamentally strong and stable. "If current robotic rovers topple over on a distant planet, they are doomed -- there is no way to send someone to get them back on their wheels again. However, TETwalkers move by toppling over. It's a very reliable way to get around," said Curtis.

The team is conducting extensive research in artificial intelligence to get the robots to move, navigate, and work together in swarms automatically. The research includes development of a new interface that integrates high-level decision making with lower level functions typically handled intuitively by living organisms, like walking and swarm behavior. All systems are being designed to adapt and evolve in response to the environment.