Planet-Finding by Numbers
More than a decade after the first planets beyond our solar system were found, astronomers have discovered about 200 of these "extrasolar planets," as they're called. Using a common-sense definition of potentially habitable planets, coupled with extensive computer simulations, scientists have calculated how many potentially habitable planets might be detected around other stars by the SIM PlanetQuest mission. ("SIM" stands for Space Interferometry Mission.) 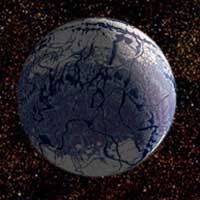 Image right: Artist's concept of a planet 3.2 times more massive than Earth. This image is part of a graph that shows the number of potentially habitable planets the Space Interferometry Mission PlanetQuest would have the sensitivity to find. Image credit: NASA/JPL
+ Click for full graph

The mission, scheduled for a launch in the next decade, will target planets with specific traits in common with Earth: a similar mass and an orbit in the "habitable zone," not too close and not too far from its parent star. With this mass and location, it's believed a planet could have liquid water on its surface and an atmosphere -- conditions considered necessary for life to gain a foothold.

The science team has shown that, in a survey of the best 120 candidate stars for hosting such planets, SIM PlanetQuest would have the sensitivity to find:

All planets discovered by the mission would be on a short list of targets for the future Terrestrial Planet Finder mission, which would look for direct signatures of habitable environments and even of life itself.

The roster of six stars where SIM PlanetQuest could find Earth-like planets, if they exist, includes some familiar names, visible in the nighttime sky: 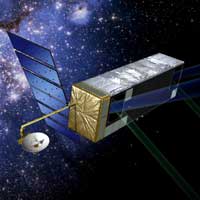 -- Sirius, in the constellation Canis Major, the closest star visible with the naked eye from the northern hemisphere's mid-latitudes, seen in winter along a line extending from Orion's belt (see Sirius in the night sky)

-- Altair, forming one corner of the "Summer Triangle" (see Altair in the night sky)

The research is contained in a paper published September 2006 in Publications of the Astronomical Society of the Pacific. Its authors are Joseph Catanzarite and Drs. Michael Shao, Stephen Unwin, Angelle Tanner, and Jeffrey Yu, all from JPL.