In the fall of 2000, sitting in my apartment in Glenn Dale, MD, I prepared to watch the coming solar eclipse with a shoebox. I opened the blinds on my window, found a comfortable spot on the floor, and propped the box up next to me, one end pointed at the sun. A tiny hole in the end pointed toward the sky allowed just enough light through to form an image of the sun on the inside wall of the box. Thus, without special filters or even a proper telescope, I spent the next hour watching the moon’s shadow creep across the disk of the sun.

I used a pinhole camera; a device known to the ancient Greeks and put to various uses ever since. A small hole punched in the wall of a box -- or a room -- creates an inverted image on a screen of whatever object the camera faces. The pinhole camera, or camera obscura, was used in the Renaissance as a drawing aid. When the screen was replaced by a photographic film, it formed the basis for today’s handheld cameras.

Now, a project funded by NASA’s Institute for Advanced Concepts (NIAC) could launch the humble pinhole camera into the sky. Dubbed the New Worlds Imager (NWI) and led by Dr. Webster Cash of the University of Colorado at Boulder, the goal is to use a large-scale camera obscura to obtain the first pictures of exosolar planets -- worlds from beyond our solar system. 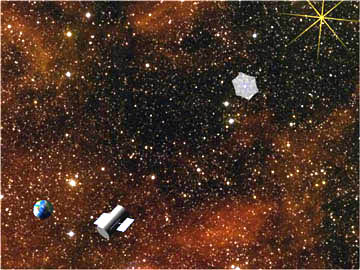 Image above: An artist's rendition of a single starshade-collector pair searching a star system for Earth-like planets. From bottom to top: collector spacecraft, starshade, and star system under study. The Earth is shown in the background. Image Credit: Cash et al.

It sounds far-fetched, but that’s what the NIAC is for. Formed in 1998 and operated by the Universities Space Research Association, the NIAC exists to fund studies of "revolutionary aeronautical and space concepts" that could form the basis of NASA missions in 10 to 40 years.

The basic building block of the New Worlds Imager is a pair of spacecraft, a starshade and a collector, that function together as a single pinhole camera. The starshade serves as the pinhole for the camera, though the entire shade will be a kilometer (0.6 miles) or more in diameter, with a hole about 10 meters (10 yards) across punched in the center. The collector holds a telescope with a primary mirror the same size as the pinhole: 10 meters. To guarantee the best images, the starshade and collector need to be separated by about 200,000 km, or about half the distance from the Earth to the Moon. Two starshade-collector pairs, their images combined in a central combiner spacecraft, form the New Worlds Imager.

If studies demonstrate its feasibility and NASA approves the mission, the New Worlds Imager could truly change our view of the universe. "I’ve always thought the most interesting things an astronomer could do would be to take a picture of a black hole, and to take a picture of an exosolar planet," says Dr. Cash, grinning. "Our ability to look out to 10 parsecs [32.62 light-years, 185 trillion miles or 296 trillion km] means we have about 1,000 stars to search for Earth-like planets, so we have a good chance of finding one."

He goes on to explain that one of the main problems of looking for exosolar planets is that the star the planet orbits is very bright compared to the planet, and its light often drowns out light from the planet we want to see. Terrestrial Planet Finder (TPF), a fully-funded NASA mission to search for planets orbiting nearby stars, will use a small occulter -- a solid disk -- to block out the light from the parent star. By placing a pinhole outside the telescope and making it bigger, Dr. Cash hopes to accomplish the same effect, but without the tight constraints on telescope and occulter quality that TPF has. "Your tolerances scale with size," he explains, "So, while NWI is prone to some of the same errors TPF is, at our large scale they’re much easier to control."

If NWI identified a system as possessing planets in the habitable zone -- a band around a star in which planets are likely to have liquid water, and therefore possibly life -- the Imager would pause its general survey to take a closer look at the planets it found. NWI’s spectrometer would analyze the planet’s atmosphere, looking for water vapor, carbon dioxide, and oxygen. "Did you know," Dr. Cash remarks, "if all plant life on Earth were to die out, and you came back a million years later, all the free [atmospheric] oxygen would be gone, absorbed back into the rocks?" Thus, if the NWI were to find both free oxygen and evidence of water on a planet, says Dr. Cash, "that planet would be a prime candidate for harboring plant life, or the alien equivalent of our plants."

Finally, the NWI would swing into imager mode, the two collector spacecraft executing a complicated dance around the combiner craft to build up an image of another world. With the ability to resolve distant objects about 100 kilometers (60 miles) across, New Worlds Imager should be able to see clouds, continents, and oceans, giving us the first true pictures of a planet far from our own solar system. Not bad for the old pinhole camera.

Why use the low-tech camera obscura to conduct such cutting-edge science? Dr. Cash has a simple answer: "A pinhole is a perfect lens," he says, "It creates zero distortion in the wavefront, and has no dust or cleanliness issues."

He does see three main technological hurdles to making the NWI a reality: finding the proper size and shape for the starshade, the deployment of the starshade, and keeping the multiple spacecraft flying the proper formation. Through this initial study of the NWI concept, he intends to discover the trade-offs and solutions to these challenges.

A larger starshade provides a larger shadow for the collector spacecraft to fly through. This makes it easier to keep the collector pointed at the starshade, but also increases the cost to build and launch the shade. Collapsing the starshade for launch and then unfurling it in space also becomes more difficult as the size of the shade increases. Different shapes for the central hole in the shade can help suppress diffraction -- a blurring of the image caused by light waves being partially blocked at the edges of the pinhole -- but it takes a good deal of modeling to find that ideal shape.

Finally, there is the problem of keeping the spacecraft flying together. Once the spacecraft are put into their proper orbits and pointed to minimize the sun’s glare, they then have to maintain this formation over the life of the mission. As the collector spacecraft is about 200,000 km (120,000 miles) from the starshade, this means it must be accurately pointed to within 0.5 arcseconds, equivalent to tracking a penny held up by someone 5 miles away. All the spacecraft must also hold their positions relative to each other to about a meter (3 ft.).

After four months of studying the problems, Dr. Cash is confident NWI is obtainable. A single starshade-collector pair can almost be built with current technology. With a modest improvement in formation flying techniques, the complete New Worlds Imager is easily within reach. "We’re finishing up the basic concept to prove we can do it," he says.

The search for another Earth