Cosmos Provides Astronomers with Planet-Hunting Tool
If only astronomers had a giant magnifying glass in space, they might be able to uncover planets around other stars.

Now they do -- sort of. Instead of magnifying a planet, astronomers used the magnifying effects of one star on a more distant star to reveal a planet around the closer star. 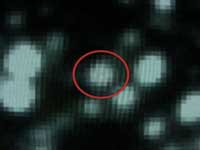 The discovery marks the first use of a celestial phenomenon known as microlensing to locate a planet outside our solar system.

A star or planet can act as a cosmic lens to magnify and brighten a more distant star lined up behind it. That's because the gravitational field of the foreground star bends and focuses light, like a glass lens bending and focusing starlight in a telescope. Albert Einstein predicted this effect in his theory of general relativity and confirmed it with our Sun.

"The real strength of microlensing is its ability to detect low-mass planets," said Dr. Ian Bond of the Institute for Astronomy in Edinburgh, Scotland. Bond is lead author of a paper appearing in the Astrophysical Journal Letters May 10 issue. Amateur astronomers might use this technique to follow up future discoveries and confirm planets as small as Earth, around stars other than our Sun. 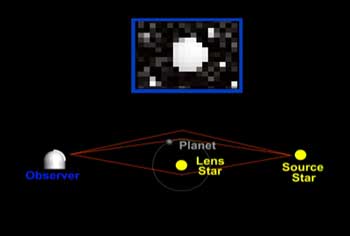 Image left: This animation demonstrates the principles of microlensing. The observatory on Earth sees the source star when the lens star and planet pass through the center of the image. The inset shows what may be seen through a ground-based telescope. The image brightens twice, indicating when the star and planet pass through the observatory's line of sight to the distant star. Image credit: NASA/JPL-Caltech.
+ Click for full image.
+ Click for animation.

The discovery was made possible through cooperation between two international research teams -- Microlensing Observations in Astrophysics, or MOA, and Optical Gravitational Lensing Experiment, or OGLE.

The newly discovered star-planet system is 17,000 light years away, in the constellation Sagittarius. The planet, orbiting a red dwarf parent star, is most likely one-and-a-half times bigger than Jupiter. The planet and star are three times farther apart than Earth and the Sun.Together, they magnify a farther, background star some 24,000 light years away, near the Milky Way center.

In most prior microlensing observations, scientists saw a typical brightening pattern, or light curve, indicating that a star's gravitational pull was affecting light from an object behind it. The latest observations revealed extra spikes of brightness, indicating the existence of two massive objects. By analyzing the precise shape of the light curve, Bond and his team determined that one smaller object is only 0.4% the mass of a second, larger object. They concluded that the smaller object must be a planet orbiting its parent star.

Image right: This animation shows the location of the new discovery near the center of our Milky Way galaxy. The images span a 120-day period in which the star became much brighter due to microlensing. There were two spikes in brightness, indicating that the passing star had a planet in orbit around it. Image credit: NASA/JPL-Caltech.
+ Click for full image.
+ Click for animation.

"I'm thrilled to see the prediction come true with this first definite planet detection through gravitational microlensing," said Paczynski. He and his colleagues believe observations over the next few years may lead to the discovery of Neptune-sized, and even Earth-sized planets around distant stars.

Microlensing can easily detect extrasolar planets because a planet dramatically affects the brightness of a background star. Because the effect works only in rare instances when two stars are perfectly aligned, millions of stars must be monitored. Recent advances in cameras and image analysis have made this task manageable. Such developments include the new large field-of-view OGLE-III camera, the MOA-II 1.8 meter (70.8 inch) telescope, now being built, and cooperation between microlensing teams.

"It's time-critical to catch stars while they are aligned, so we must share our data as quickly as possible", said OGLE team-leader Dr. Andrzej Udalski of Poland's Warsaw University Observatory. The Polish/American project is led by Udalski in Poland and Paczynski in the United States. It operates at Las Campanas Observatory in Chile, run by the Carnegie Institution of Washington, and includes the world's largest microlensing survey on the 1.3 meter (51-inch) Warsaw Telescope.

More information on NASA's planet-hunting efforts is at http://planetquest.jpl.nasa.gov.