Instrument to Unveil New Worlds by Blocking Out Starlight 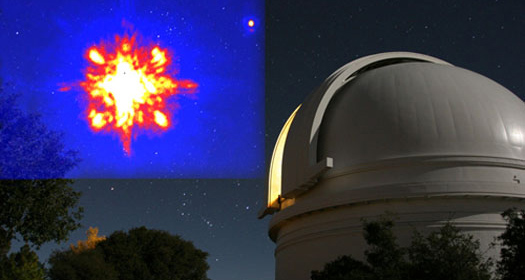 Above: The Lyot Project will be installed at Palomar Observatory, where adaptive optics systems are used to obtain sharper images such as this infrared view of the star Gliese 105 (inset).

Although more than 250 planets are known to orbit other stars, so far no one has been able to get a good look at any of them. That's largely because a star's glare is millions of times brighter than a planet, so trying to see a planet next to a star is akin to trying to spot a firefly next to a spotlight, from thousands of miles away. But it's a problem Oppenheimer and his colleagues at the American Museum of Natural History in New York hope to solve with a new instrument called the Lyot Project.

"I think we are very close to having a picture of an exoplanet - maybe even within two years ... it's a race," he said.

Right: These two images simulate the performance of the Lyot coronagraph. It works by blocking light from a star so that the planets orbiting it can be more clearly seen.

At the heart of the project is an advanced coronagraph, a type of instrument that can get better information about exoplanets by directly blocking the light from the stars they orbit - similar to shielding your eyes from the sun on a bright day. "It's like an artificial eclipse," Oppenheimer said. The hope is that the instrument eventually will be able to block out enough of a star's light that astronomers can snap pictures of exoplanets - and maybe even discover another Earthlike world.

The coronagraph itself is a four-foot square piece of breadboard studded with mirrors and light-collecting instruments. Starlight gathered by a telescope is bounced by mirrors into the coronagraph, which focuses the image, then sends the light past what is called an occulting spot. This dark spot blocks out the light from the central portion of the star image, similar to holding your thumb up to the setting sun. Another light-blocking stage, called the Lyot stop, removes most of the remaining rings of light from the star. The result is an image that contains only 1.5 percent of the light from the star, making it much easier to pick out the faint planets that orbit it. 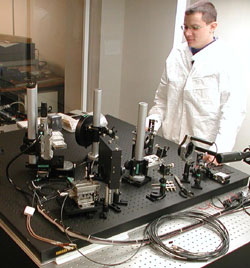 For the first three years of its existence, the Lyot instrument was located at an Air Force Telescope in Maui, Hawaii, the US Air Force AEOS (Advanced Electro Optical System). This telescope proved a good testing ground for the coronagraph and the team is just beginning to publish their findings from that period. Now the coronagraph is back in Oppenheimer's New York lab, where it's being retrofitted for installation at the Palomar Observatory in California, near San Diego.

Left: Ben Oppenheimer, the principal investigator of the Lyot Project, makes adjustments to the coronagraph on a work bench.

Palomar's 200-inch Hale Telescope was an obvious choice, Oppenheimer said, because it is undergoing improvements that will give it the highest level of correction of any Earth-bound telescope. "We're trying to push the technology forward √ñ trying new technology on real telescopes, where reality is different than it is in the lab," he said.

The telescope has 249 actuators - tiny deformable mirrors that work to smooth out light that has been distorted by the atmosphere and gravity in space. In 2010, that number will be upgraded to 3,000, giving Palomar the ability to observe incredibly precise images. That accuracy is vitally important to planet hunters like Oppenheimer as they try to pick out very faint planets many light-years away.

The Lyot team plans to have the coronagraph installed in Palomar by next summer, and the project will be in full swing when the telescope's optics are upgraded two years later.

Meanwhile, at NASA's Jet Propulsion Laboratory in Pasadena, California, another group of researchers has begun work on a project that will help make the Lyot Project's findings even more accurate. The Post Coronagraph Wavefront Sensor is an instrument that will receive the light that has already passed through the coronagraph. The calibration system will analyze this image for flaws and pass the information back to the adaptive optical system that first receives the starlight, allowing it to further correct the image. 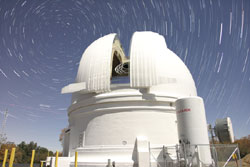 "This device sharpens the images, takes out speckles and fine-tunes it," said Mike Shao, a JPL engineer who is heading up the project. "We just started work on it a few weeks ago and we hope to install it in two years." Shao explains that while correction systems like those he is working on have been used before, his current project should be "three orders of magnitude more powerful than the previous generation." and is one of the first sensors of its kind to be used with light that's already passed through a coronagraph.

Right: Palomar Observatory, California, houses some of the most advanced telescopes in the world and is the future home of the Lyot Project.

The information that Shao, Oppenheimer and the rest of those working on the Lyot Project hope to uncover will be invaluable to astronomers who want to know how our solar system fits into the big picture. Oppenheimer stresses that that until now, Earth's solar system had been our only model for how other planetary systems work. He compares it to the study of music. "If you just listened to Elvis, you wouldn't be able to predict the existence of classical music or rap," Oppenheimer said. "We're laying the technical groundwork for us to be able answer compelling, fundamental questions."

Oppenheimer predicts that the field of exoplanet observation will progress quickly as projects like Lyot push the technological envelope. As for the discovery of an Earth-like planet, he predicts that it's also not that far off. And he's optimistic about the effect such a discovery will have on our perception of the universe.

"People have a tendency to think of themselves as the center of the universe," he muses. "But planets are very plentiful - they may outnumber the stars. I hope [the discovery of an Earth-like planet] would influence our consciousness at large when it happens."

Joshua Rodriguez/PlanetQuest
› Back To Top