Scientists Discover First of a New Class of Extrasolar Planets
Results from NASA-funded research have put humankind just a little closer to answering the age old question, "Are we alone in the universe?"

Astronomers have announced the first discovery of a new class of planets beyond our solar system. The Neptune-sized planets -- about 10 to 20 times the size of Earth -- are far smaller than any of the previously detected extrasolar "gas giants." It's even possible that the new class of planets is rocky, like Earth and Mars, and scientists are enthusiastic about the discoveries that may come next. 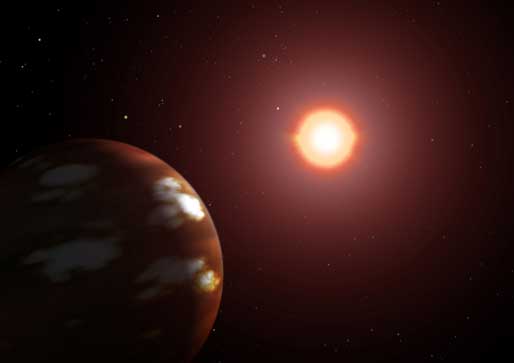 Image above: This artist's concept shows the newly discovered Neptune-sized extrasolar planet circling the star Gliese 436. In this depiction, the planet appears gaseous like Jupiter, with a cloudy atmosphere. In reality, astronomers do not know if this planet is gaseous, or rocky, like Earth and Mars. + Click for larger image. Image coutesy: NASA.
More images and animations are available at http://planetquest.jpl.nasa.gov/news/ssu_images.html .

"These Neptune-sized planets prove that Jupiter-sized, gas giants aren't the only planets out there," Dr. Geoffrey Marcy, one of the planet co-discoverers, said. His partner, Dr. Paul Butler, added, "We are beginning to see smaller and smaller planets. Earth-like planets are the next destination."

In addition, one of the new planets joins three others around the nearby star 55 Cancri to form the first known four-planet system.

The discoveries consist of two new planets. They were discovered by the world renowned planet-hunting team of Butler and Marcy of the Carnegie Institute of Washington and University of California, Berkeley, respectively; and Barbara McArthur of the University of Texas, Austin. Both findings were peer- reviewed and accepted for future publication in the Astrophysical Journal. NASA and the National Science Foundation funded the research.

Because the new planets are smaller than Jupiter, it is possible they are made of rock, or rock and ice, rather than gas. According to the scientists, the planets may have, like Earth, formed through gradual accumulation of rocky bodies. "A planet of Neptune's size may not have enough mass to hold onto gas, but at this point we don't know," Butler said. 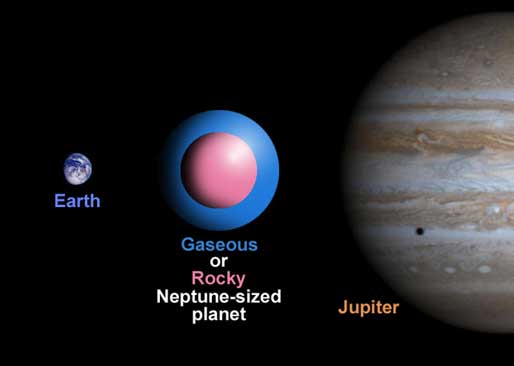 Image above: This illustration compares the size of the newfound Neptune-sized planets beyond our solar system to the sizes of Earth and Jupiter. The new planets are only about 20 times the mass of Earth, or about two times the actual size or diameter - much smaller than the majority of Jupiter-sized extrasolar planets detected so far. Image coutesy: NASA/JPL.

"NASA, along with our partner NSF, is extremely proud of this significant planetary discovery," said Al Diaz, Associate Administrator of NASA's Science Mission Directorate. "The outcome of the tremendous work of the project scientists is a shining example of the value of space exploration."

Future NASA planet-hunting missions, including Kepler, the Space Interferometry Mission and the Terrestrial Planet Finder, will seek such Earth-like planets. Nearly 140 extrasolar planets have been discovered.

Both of the new planets stick very close to their parent stars, whipping around them in a matter of days. The first planet, discovered by Marcy and Butler, circles a small star called Gliese 436 about every two-and-one-half days at just a small fraction of the distance between Earth and the Sun, or 4.1 million kilometers (2.6 million miles). This planet is only the second known to orbit an M dwarf, a type of low-mass star four-tenths the size of our own sun. Gliese 436 is located in our galactic backyard, 30 light-years away in the constellation Leo.

The second planet, found by McArthur, speeds around 55 Cancri in just under three days, also at a fraction of the distance between Earth and the sun, at approximately 5.6 million kilometers (3.5 million miles). Three larger planets also revolve around the star every 15, 44 and 4,520 days, respectively. Marcy and Butler discovered the outermost of these in 2002. It is still the only known Jupiter-like gas giant to reside as far away from its star as our own Jupiter. The 55 Cancri is about 5 billion years old, a bit lighter than the sun, and is located 41 light-years away in the constellation Cancer. "55 Cancri is a premier laboratory for the study of planetary system formation and evolution," McArthur said.

Both discoveries were made using the "radial velocity" technique, in which a planet's gravitational tug is detected by the wobble it produces in the parent star. Butler, Marcy and collaborators, including Dr. Deborah Fischer of San Francisco State University and Dr. Steven Vogt of the University of California, Santa Cruz, discovered their "Neptune" after careful observation of 950 nearby stars with the W.M. Keck Observatory in Mauna Kea, Hawaii. They were able to spot such a relatively small planet, because the star it tugs on is small and more susceptible to wobbling.

McArthur and collaborators Drs. Michael Endl, William Cochran and Fritz Benedict of the University of Texas discovered their "Neptune" after obtaining over 100 observations of 55 Cancri from the Hobby- Eberly Telescope at McDonald Observatory in West Texas. Combining this data with past data from Marcy, Fischer and Butler from the Lick Observatory in California, and archival data from NASA's Hubble Space Telescope, the team was able to model the orbit of 55 Cancri's outer planet. This, in turn, allowed them to clearly see the orbits of the other three inner planets, including the new Neptune-sized one.

More images and animations are available at http://planetquest.jpl.nasa.gov/news/ssu_images.html .

Information about NASA's hunt for extrasolar planets is available at http://planetquest.jpl.nasa.gov.