Scientists Discover Record Fifth Planet Orbiting Nearby Star
PASADENA, Calif. - Astronomers have announced the discovery of a fifth planet circling 55 Cancri, a star beyond our solar system. The star now holds the record for number of confirmed extrasolar planets orbiting in a planetary system.

55 Cancri is located 41 light-years away in the constellation Cancer and has nearly the same mass and age as our sun. It is easily visible with binoculars. Researchers discovered the fifth planet using the Doppler technique, in which a planet's gravitational tug is detected by the wobble it produces in the parent star. NASA and the National Science Foundation funded the research. 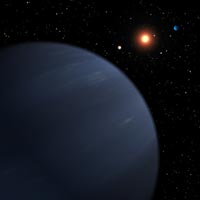 Image right: This artist's concept shows planets that orbit 55 Cancri, a star much like our own. Image credit: NASA/JPL-Caltech
+ Full image and caption
+ Related animation

"It is amazing to see our ability to detect extrasolar planets growing," said Alan Stern, associate administrator for the Science Mission Directorate at NASA Headquarters, Washington. "We are finding solar systems with a richness of planets and a variety of planetary types comparable to our own."

The newly discovered planet weighs about 45 times the mass of Earth and may be similar to Saturn in its composition and appearance. The planet is the fourth from 55 Cancri and completes one orbit every 260 days. Its location places the planet in the "habitable zone," a band around the star where the temperature would permit liquid water to pool on solid surfaces. The distance from its star is approximately 116.7 million kilometers (72.5 million miles), slightly closer than Earth to our sun, but it orbits a star that is slightly fainter. 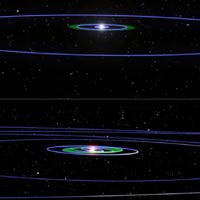 "The gas-giant planets in our solar system all have large moons," said Debra Fischer, an astronomer at San Francisco State University and lead author of a paper that will appear in a future issue of the Astrophysical Journal. "If there is a moon orbiting this new, massive planet, it might have pools of liquid water on a rocky surface."

Fischer and University of California, Berkeley, astronomer Geoff Marcy, plus a team of collaborators discovered this planet after careful observation of 2,000 nearby stars with the Shane telescope at Lick Observatory located on Mt. Hamilton, east of San Jose, Calif., and the W.M. Keck Observatory in Mauna Kea, Hawaii. More than 320 velocity measurements were required to disentangle signals from each of the planets.

"This is the first quintuple-planet system," said Fischer. "This system has a dominant gas giant planet in an orbit similar to our Jupiter. Like the planets orbiting our sun, most of these planets reside in nearly circular orbits."

"Discovering these five planets took us 18 years of continuous observations at Lick Observatory, starting before any extrasolar planets were known anywhere in the universe," said Marcy, who contributed to the paper. "But finding five extrasolar planets orbiting a star is only one small step. Earth-like planets are the next destination."

"This work marks an exciting next step in the search for worlds like our own," said Michael Briley, an astronomer at the National Science Foundation. "To go from the first detections of planets around sun-like stars to finding a full-fledged solar system with a planet in a habitable zone in just 12 years is an amazing accomplishment and a testament to the years of hard work put in by these investigators."

For visuals depicting the new planets on the Web, visit: