Astronomers at NASA's Jet Propulsion Laboratory have recently concluded that the upcoming planet-finding mission, SIM PlanetQuest, would be able to detect an Earth-like planet around the star 40 Eridani, a planet familiar to "Star Trek" fans as "Vulcan." 40 Eridani, a triple-star system 16 light-years from Earth, includes a red-orange K dwarf star slightly smaller and cooler than our sun. Vulcan is thought to orbit that dwarf star, called 40 Eridani A. 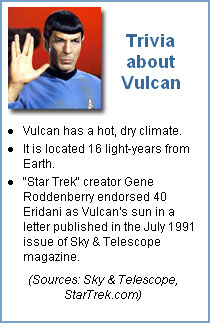 When pondering the idea that SIM might be able to detect Vulcan, astronomer Dr. Angelle Tanner at Caltech had two questions: Can a planet form around 40 Eridani A? Can SIM detect such a planet?

She consulted a planetary theorist, Dr. Sean Raymond of the University of Colorado, Boulder. "Since the three members of the triple star system are so far away from each other [hundreds of astronomical units - the Earth-Sun distance], I see no reason why an Earth-mass planet would not be able to form around the primary star, 40 Eridani A," he said.

If Vulcan life were to exist on the planet, the orbit of the planet would have to lie in a sweet spot around the star where liquid water could be present on its surface. Water is an essential ingredient for any organism to live long and prosper. For 40 Eridani A, this spot, or "habitable zone," is 0.6 astronomical units from the star. That means Vulcans would get to celebrate a birthday about every six months.

The SIM PlanetQuest instrument will be so accurate, it could measure the thickness of a nickel at a distance from Earth to the moon. Using a set of mathematical models based on Newton's Laws, Tanner was able to conclude that SIM would be able to definitively determine whether there is an Earth-mass planet orbiting in the habitable zone around 40 Eridani A, and could also determine its orbit.

This is quite an exciting prospect, since NASA's Terrestrial Planet Finder mission, planned for launch after SIM, would not only be able to take a rudimentary "picture" of the planet, but also could search for signatures of life such as methane and ozone. 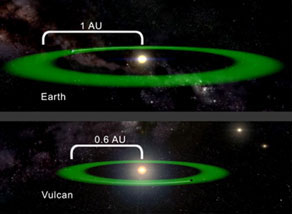 Image at left: Artist's concept comparing our sun's habitable zone with that of 40 Eridani.
+ Related animation

When asked what life would be like on Vulcan, Tanner speculated that the inhabitants might be pale. "A K dwarf star emits its light at wavelengths which are a bit redder compared to those from the sun, so I wonder whether it's harder to get a tan there," she said.

The results of Tanner's simulations will be submitted for publication in the Publications of the Astronomical Society of the Pacific.