Where are the other Earths?

Answering that question is just the first step in NASA's long-range quest to look for life around stars beyond our solar system, according to Dr. Wesley Traub. And to answer it, he says, we have to go into space.

Traub was recently named chief scientist for the Navigator Program, a series of interrelated missions that will discover and characterize nearby planetary systems. The program will kick into high gear with SIM PlanetQuest, scheduled to launch within the next decade. SIM PlanetQuest will identify Earthlike targets for the follow-on Terrestrial Planet Finder observatories, which will use remote sensing capabilities to characterize the planets and determine which are habitable, or even inhabited.

Previously a senior physicist at the Harvard-Smithsonian Center for Astrophysics, Traub received his Ph.D. in physics from University of Wisconsin-Madison in 1968. He was the project scientist for Infrared-Optical Telescope Array (IOTA) and the principal investigator for Far-Infrared Spectrometer (FIRS-2). His research fields include extrasolar planets, high angular resolution astrophysics and stratospheric physics and chemistry.

Traub was recently interviewed at JPL. 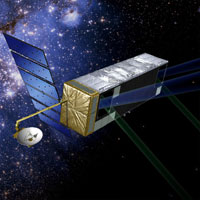 Image at right: Artist's concept of SIM PlanetQuest, the first mission that will be able to find nearby Earthlike planets.

PlanetQuest: Briefly, what are NASA's planet-finding goals over the next decade?

Wesley Traub: Well, NASA has been in the planet-finding business for a long time. This is not something new. So the plan for NASA in the coming decade is basically to follow up on the recent discoveries of about 200 planets we know about today. The main thing we'd like to know is, are there any other planets out there that look like Earth?

PQ: How will a mission like SIM PlanetQuest be unique in terms of trying to locate some of these planets?

PQ: How does SIM PlanetQuest set the stage for more advanced planet-finders in the future?

Traub: The purpose of SIM PlanetQuest is to look for all sizes of planets around nearby stars, and the range goes all the way out to these heavy Jupiters, all the way down to single-Earth mass. Nearby stars are of interest because we can follow up with later missions that will focus on these stars, and isolate the really bright light of the star from the faint light of the planet so we can characterize these planets and see if there's life.

PQ: So SIM PlanetQuest is going to act as a precursor and look for planets where we could then narrow in and find something that could be truly Earthlike.

Traub: Absolutely. We'll know exactly where and when to look with two succeeding missions planned after SIM -- the Terrestrial Planet Finder Coronagraph, and the Terrestrial Planet Finder Interferometer. These two missions will check whether SIM gave the right info, find planets SIM couldn't find, and will characterize the planets. They will tell us whether or not the light that comes from a planet is similar to the light from Earth.

Image at left: Artist's concept of the Terrestrial Planet Finder observatories, which will be able to directly observe and characterize other Earth-size planets.

[Note: Kepler, another JPL planet-finding mission, will perform a census of Earthlike planets around distant stars. Kepler is scheduled to launch in 2008.]

PQ: What is the most important question that you hope will be answered by these missions?

Traub: I think the most important thing would be to answer the question of whether there's life on other planets. I know this sounds like it's beginning to edge into the territory of material you see in the supermarket checkout line ...

Actually, just 10 years ago, when I went to my first meeting that was going to discuss searching for planets I was a little embarrassed about it. I didn't tell my colleagues I was going, and then I realized there were other people there that I respected, and I thought, well, maybe this isn't so bad. So it edges on asking questions that are outside the realm of traditional astronomy, but I think this is the kind of thing that we are able to do and that people are really interested in. And I think, technically, we can do it today.

PQ: Speaking as an individual, and not as a scientist, do you think there is a planet out there with intelligent life?

Traub: I guess at heart I believe there are planets with life on them. I don't know about intelligent life. The usual argument is that there are billions of stars out there, and today we think the chances of planets being around each one of them are pretty high, which we didn't used to think. And we think that life formed very quickly, as soon as it was possible on Earth. But out of the billions of stars in our galaxy, we only have a chance of looking at about 200 stars that are nearby. The chances of intelligent life being there on one of those, right now, are pretty small.

PQ: It must strike you once and awhile that you have a really interesting job -- looking for life on other planets and coming up with missions to find those planets. Is there anything boring about it?

Traub: Oh, there's nothing boring about it. When I came here to JPL from Boston about a year ago, people said, why are you moving? I explained, you know, this is the most exciting thing I could think of to do with my life. Even in three lifetimes. There is going to be no other point in history where we can discover the first Earthlike planet and tell if there's life on it -- this will never happen again. I just hope it happens when I'm working on it.