Look, Up in the Sky: It's Another Solar System! 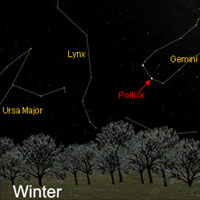 If you've ever looked up on a clear winter night, you've probably seen it: Pollux, also known as Beta Geminorum, one of the brightest and most familiar stars in the night sky. And now, scientists have discovered that it harbors a secret: a hidden planet, about three times the size of Jupiter.

Image at right: A planet has been found orbiting Pollux, which forms part of the constellation Gemini and can be easily spotted in winter.

The discovery of the new planet, dubbed Beta Genorium b, was announced recently by two separate planet-finding teams, one led by Sabine Reffert and the other by Artie Hatzes, both of Germany. Research by the latter team was supported, in part, by a grant from NASA.

Both teams found the planet using the Doppler (or radial velocity) method, which infers the existence of a planetary companion from its gravitational tug on the host star. The new planetary system is located about 34 light-years away in the constellation Gemini. (Click for sky locator map)

In other planet-discovery news, astronomers have announced the discovery of a fourth planet orbiting the star Mu Arae (a.k.a. HD 160691), located in the constellation Ara. The planet is about half the mass of Jupiter and orbits the star at a distance similar to the distance at which the Earth orbits the sun. Mu Arae is the second extrasolar system known to host four planets.

The recent discoveries bring the total number of known extrasolar planets around normal, sun-like stars to 193. None of the planets found so far are considered habitable, but NASA is planning future missions, such as SIM PlanetQuest and Terrestrial Planet Finder, that will be capable of detecting Earthlike planets beyond our solar system. For more information, visit NASA's PlanetQuest Web site at http://planetquest.jpl.nasa.gov.

Written by Randal Jackson/PlanetQuest
› Back To Top