Ion Thrusters Propel NASA into Future
President George W. Bush announced a new plan for NASA in Jan. 2004. A renewed focus on space exploration, he explained, would strengthen our leadership in the world, improve our economy and enhance the quality of our lives. 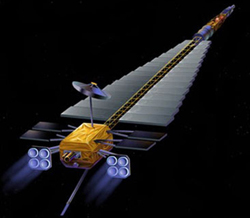 The Vision for Space Exploration calls for human and robotic missions to the Moon, Mars and beyond. To realize these ambitious goals, we will need more powerful and efficient propulsion and power-generation systems -- systems that can thrust a spacecraft out of Earth's orbit to the far reaches of the Universe.

NASA's primary research program for developing these technologies is Prometheus Nuclear Systems and Technology. Named for the ancient Greek god of fire and craft, Prometheus has two initial objectives:

Prometheus 1 would launch using conventional chemical rockets. But once in Earth's orbit, a nuclear electric propulsion system would propel it through space. Nuclear electric propulsion is over 10 times more efficient than chemical rockets and produces 20 times more power than the generators used on space probes such as Voyager and Cassini or solar-powered systems like Deep Space 1.

"A nuclear electric propulsion system could propel and power at least ten times as much payload science as other systems," said Research Engineer Steve Oleson of the NASA Glenn Research Center. "It could allow a spacecraft to beam more information back to Earth."

As a result, scientists could closely study the surfaces of the outer planets and their moons as well as the surfaces and interiors of comets.

In a nuclear electric propulsion system, a nuclear reactor produces heat, a power-conversion system converts the heat to electricity, and an ion thruster uses the electricity to propel the spacecraft. 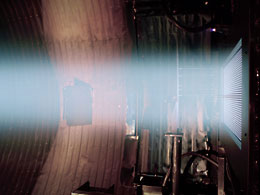 Deep Space 1, which launched in 1998, was the first spacecraft to use an ion thruster as its primary propulsion system. But that thruster, developed at the Glenn Research Center, drew its electricity from solar panels.

Scientists and engineers from the NASA Glenn Research Center and the Jet Propulsion Laboratory have worked for more than two years to build a high-power ion thruster that will help NASA realize the Vision for Space Exploration.

Dubbed Herakles, the new ion thruster is based on the Deep Space 1 system, but it will use electricity from a reactor to produce plasma from xenon -- the same gas found in photo flash bulbs. Ions from the plasma will be extracted and then accelerated at extremely high speeds. In space, as the xenon ion beam rushes from the thruster, it will propel the spacecraft in the opposite direction.

Although Herakles' thrust is as gentle as the force of 10 U.S. quarters in your hand, the speed of the spacecraft will constantly increase as it travels. That means Prometheus 1 could eventually reach speeds greater than 200,000 mph -- 10 times faster than the speed of Space Shuttles. 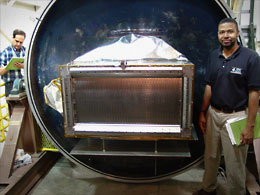 Image left: Dr. George Williams (left) and Dr. John Foster (right) get ready to test an early version of the high-power ion thruster. While this thruster is rectangular, Herakles will be round. Credit: NASA

The new ion thruster is designed to last seven to 10 years in space and is about 15 times more efficient than the Space Shuttle Main Engines.

"That leaves more room for scientific instruments and allows the craft to perform multiple missions on just one tank of fuel."

Herakles and other components of Prometheus 1 are scheduled for advanced flight development in 2006. The spacecraft's first mission would be a long-duration robotic trip to the Moon. But ultimately, Prometheus Nuclear Systems and Technology could help us explore the outer planets to search for signs of life and clues to the origin of the solar system.