Slip Sliding Away
On February 9, the wake up song for Opportunity was "Slip Sliding Away" by Simon and Garfunkel in honor of the experience the prior day when Opportunity first tried to scoot up the crater slope at Meridiani Planum. The ambitious rover aimed for its target and willingly went forth up the slope; nevertheless, Opportunity slipped and slid in the sand, making it only half way to its target. 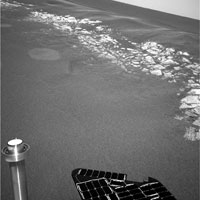 But ignorance is bliss, and while Opportunity's wheels had a hard time gaining traction on the sandy surface, the rover's brain (or computer) had a hard time grasping that it hadn't successfully made it to its target. The little rover didn't have to encourage itself to make it up the crater slope later by chanting, "I think I can, I think I can," because the little rover thought it actually did make it up the slope the first time.

Image left: Opportunity failed to complete the first big climb of the outcrop on February 8 due to the wheels slipping up the martian slope. Credit: NASA/JPL.

Measuring the Distance Traveled on Mars

"Like a car on Earth, each Mars rover uses an odometer to click off the distance its wheels travel to measure and register how far the vehicle has moved," explains Randy Lindemann, rover mobility lead. One revolution of the rover wheel equals 80 centimeters or 2.6 feet, so after the wheels have revolved four times, the rover believes that it has moved forward 320 centimeters or 10.5 feet (80 centimeters X 4 = 320 centimeters). 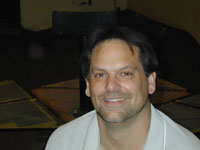 Alas, Opportunity's wheels had a hard time grasping onto the sandy ground around the crater and the wheels spun in place before they actually gained tracking. "As Opportunity's wheels turned and ticked off 80 centimeters (2.6 feet) each revolution, they eventually spun four times, calculating to what it thought was a distance of 320 centimeters (10.5 feet). Thus, Opportunity believed it had reached its goal, when in reality, it had spun in place 50 percent of the revolutions and only really made it 160 centimeters (5.25 feet)," said Lindemann.

In order to prevent any future missed targets, Opportunity's mobility experts quickly started trying to predict exactly how far the rover would slip down a slope or fall short of a target while climbing up a slope due to the loose terrain along the steep angles of the crater wall. "Since the rover isn't on cruise control and can't rev its engine to get some extra oompf to go up a hill, we continually have to outwit Opportunity's odometer and command the rover to go farther or shorter than the real target distance," said Rover Driver Eric Baumgartner. 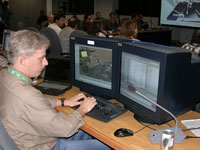