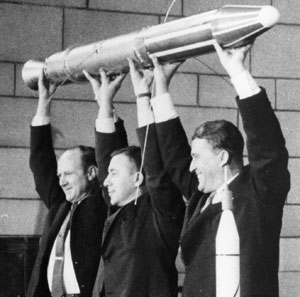 NASA is remembering pioneering astrophysicist James Van Allen, who died Aug. 9 at the age of 91.

"James Van Allen was one of the greatest and most accomplished American space scientists of our time and few researchers had such wide range of expertise in so many scientific disciplines," said NASA Administrator Michael Griffin. "NASA's path of space exploration is far more advanced today because of Dr. Van Allen's ground breaking work."

Van Allen's most widely known contribution was the 1958 discovery of radiation belts, now called Van Allen belts, encircling the Earth. He also is credited with discovery of a new moon of Saturn in 1979, as well as radiation belts around that planet.

Van Allen was at the forefront of physics. During his career, he was the principal investigator for scientific investigations on 24 Earth satellites and planetary missions, beginning with the first successful American satellite, Explorer I, and continuing with Pioneer 10 and Pioneer 11. He also helped develop the first plans for an International Geophysical Year.

"Great discoveries are the hallmarks of exploration," said Lou Friedman, the founder and executive director of Planetary Society who worked with Van Allen on planetary missions in the mid-70s. "Jim Van Allen provided many such hallmarks -- including the one that will forever bear his name around our planet. He was a great scientist, a great explorer and a great man: honored and honorable."

"He was a pioneer who helped give birth to the space age and later enabled many great spacefaring adventures and helped open up the outer solar system for exploration," said Friedman. "Anyone who knew him was privileged. We, at The Planetary Society, count ourselves among the privileged -- he helped launch us and was a loyal Advisor for many years." 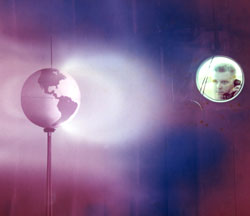 In recognition of his contribution to U.S. space research, Van Allen received 13 honorary doctorates, NASA's Medal of Exceptional Achievement, the Commander of the Order du Merite pour la Recherche et L'Invention and the Gold Medal of the Royal Astronomical Society.