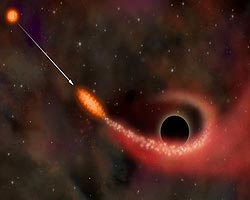 A yellow star in the center of galaxy RX J1242-11was bumped off course by another star and thrown into the path of a supermassive black hole. The enormous gravity of the black hole stretched the star until it was partially devoured and torn apart. These events are often known as "stellar tidal disruptions."

This illustration shows the star's catastrophic destruction on a path that took it near a supermassive black hole. Because of the momentum and energy of the accretion process only a small amount of the destroyed star was consumed. Illustration courtesy of NASA/CXC/M.Weiss

"Stars can survive being stretched a small amount, but this star was stretched beyond its breaking point. This unlucky star just wandered into the wrong neighborhood," said Dr. Stefanie Komossa of the Max Planck Institute for Extraterrestrial Physics.

Images from Chandra, XMM-Newton and earlier images from the German Roentgen satellite ROSAT detected a strong X-ray eruption from the middle of galaxy RX J1242-11. The black hole was estimated to have had a mass of about 100 million times the Earth's Sun. In comparison, the star had a mass that was about equal to the Sun. In the pull of gravity battle between the two, the smaller star lost.

Astronomers estimate that only about 1 percent of the star's mass was swallowed by the black hole. Most of it was catapulted into the galaxy in the form of dust and gas. The outburst was caused by the gas from the obliterated star being super-heated to millions of degrees Celsius, before being swallowed by the black hole. The energy released was equivalent to a supernova and considered one of the most intense ever detected in a galaxy. 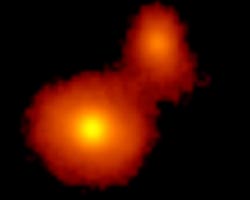 The search for tidal disruptions gives researchers a new way to hunt for black holes and determine how fast they grow by consuming their star neighbors. The X-ray data indicate that the enormous force of gravity near a black hole can not only annihilate another celestial body, but fling most its debris far away from the black hole.

At right, a pair of galaxies are visible, showing the expected location for a supermassive black hole. Image courtesy of ESO/MPE/S.Komossa

Astronomers estimate that the tidal disruption of a star happens only about once every 10,000 years in a typical galaxy. But with the combined efforts of Chandra and XMM-Newton and the yet to be completed Constellation-X Observatory, scientists will have the ability to detect these incidents in thousands of galaxies across the universe.

New studies of stellar tidal disruptions will help astronomers understand the intense nature of supermassive black holes. Scientists do know that if the black hole in the center of our galaxy decides to have a neighbor for lunch, it wouldn't be a threat to Earth. Whew!