For Fuel Conservation in Space, NASA Engineers Prescribe Aerocapture
With gas prices sky-high, conserving fuel has become a national obsession. Accelerate slowly. Stop gently. Allow ample time to reach your destination. But what if you want to conserve fuel and still get there in a hurry? For a team of NASA engineers, the answer is aerocapture.

Aerocapture technology is a flight maneuver that inserts a spacecraft into orbit around a planet or moon by using the destination's atmosphere like a "brake." The dense atmosphere creates friction, which is used to slow down a craft, transferring the energy associated with the vehicle's high speed into heat. This allows for a quick orbital capture without the need for a heavy load of on-board propellant, which increases launch cost. 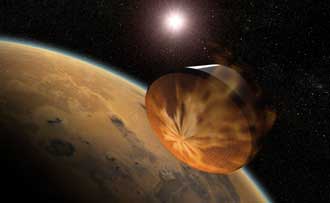 Aerocapture is part of a unique family of "aeroassist" technologies being developed by NASA for science missions to any planetary body with an appreciable atmosphere. These destinations could include Mars, Venus and Saturn's moon Titan, along with the outer planets.

There are several alternative vehicle designs that can be used for aerocapture. One option is enveloping spacecraft in a capsule with heat shielding applied to the external surfaces. This type of “aeroshell” isn’t new. It was used in the 1960s and 1970s to bring astronauts home from our moon during the Apollo Program, in 1997 for the Mars Pathfinder mission, and in 2003 during the entry, descent and landing of the two Mars Exploration Rovers, Spirit and Opportunity.

Rigid aeroshell designs, which encase a spacecraft in a hard, protective shell, are among those being studied. For rigid aeroshell aerocapture, a thermal protection system is needed to shield the spacecraft from the high heat it experiences when it enters the atmosphere of a moon or planet. NASA scientists and engineers are already "hot" on the trail. Testing is under way on several new thermal protection systems specially suited for rigid aeroshell aerocapture systems.

Applied Research Associates of Denver, Colo., currently is conducting tests of a family of new thermal protection systems at the National Solar Thermal Test Facility at Sandia National Labs in Albuquerque, N.M. The facility uses a common household item to perform the testing -- mirrors, and lots of them. The test facility’s solar tower uses 212 large mirrors to track the sun and focus sunlight on a target, simulating the high heat encountered during an aerocapture maneuver.

Lockheed Martin, also in Denver, is currently testing an advanced technology aeroshell system that absorbs heat as a spacecraft enters an atmosphere. These tests are being done at the NASA Ames Research Center at Moffett Field, Calif., and at the Lockheed facilities in Denver.

Along with the rigid aeroshell system, NASA is also considering inflatable deployed systems that decelerate a spacecraft by providing a large drag area. One such system is an inflatable, trailing "ballute," a combination balloon and parachute made of thin, durable material that deploys and trails behind a spacecraft to slow it down. Ball Aerospace in Boulder, Colo., is designing and testing a trailing ballute system at ILC Dover in Frederica, Del., and in the wind tunnels at the NASA Langley Research Center in Hampton, Va. Ball also is also developing a ballute system that is attached to the aft body of the spacecraft and acts like an inflatable "skirt" to decelerate the incoming spacecraft. An inflatable rigid aeroshell option is also being developed by the team at Lockheed Martin in Denver.

Aerocapture technology is being considered for a broad range of future mission objectives. Although the orbit capture maneuver has never been flight tested, ablative and non-ablative entry capsules have been used throughout the U.S. space program, providing plenty of relevant experience. This includes the Apollo return capsule, used between 1963 and 1972 to return humans from the moon and Earth orbits, and the Galileo Probe, launched in 1989 on a 14-year mission to explore the planet Jupiter and its surrounding moons.

Many other aerocapture component technologies already exist, or have evolved from other aeroentry applications. The aeroshell and thermal protection systems have heritage to those developed for past Earth, Venus, Mars and Jupiter missions. The ability to guide and control a blunt body design was human-rated -- tested on the ground by human test subjects -- for the capsule used during the Apollo era to return astronauts to Earth. These tests were part of a weather contingency plan but were never used or tested during space flight.

Aerocapture could open the door to destinations throughout our solar system, making possible near and mid-term space science missions that are keys to NASA's exploration goals.

For more information about advanced propulsion technologies being developed by NASA, visit:


For more information about aerocapture technology development and other in-space propulsion technologies, visit: