Evicting Einstein
A physics experiment on the drawing board for the International Space Station could help find the grand unifying Theory of Everything.

Sooner or later, the reign of Einstein, like the reign of Newton before him, will come to an end. An upheaval in the world of physics that will overthrow our notions of basic reality is inevitable, most scientists believe, and currently a horse race is underway between a handful of theories competing to be the successor to the throne.

In the running are such mind-bending ideas as an 11-dimensional universe, universal "constants" (such as the strength of gravity) that vary over space and time and only remain truly fixed in an unseen 5th dimension, infinitesimal vibrating strings as the fundamental constituents of reality, and a fabric of space and time that's not smooth and continuous, as Einstein believed, but divided into discrete, indivisible chunks of vanishingly small size. Experiment will ultimately determine which triumphs.

Right: According to Einstein's theory of general relativity, the Sun's gravity causes starlight to bend, shifting the apparent position of stars in the sky. [Larger image] Credit: NASA

A new concept for an experiment to test the predictions of Einstein's relativity more precisely than ever before is being developed by scientists at NASA's Jet Propulsion Laboratory (JPL). Their mission, which effectively uses our solar system as a giant laboratory, would help narrow the field of vying theories and bring us one step closer to the next revolution in physics.

It may not weigh heavily on most people's minds, but a great schism has long plagued our fundamental understanding of the universe. Two ways of explaining the nature and behavior of space, time, matter, and energy currently exist: Einstein's relativity and the "standard model" of quantum mechanics. Both are extremely successful. The Global Positioning System (GPS), for instance, wouldn't be possible without the theory of relativity. Computers, telecommunications, and the Internet, meanwhile, are spin-offs of quantum mechanics.

But the two theories are like different languages, and no one is yet sure how to translate between them. Relativity explains gravity and motion by uniting space and time into a 4-dimensional, dynamic, elastic fabric of reality called space-time, which is bent and warped by the energy it contains. (Mass is one form of energy, so it creates gravity by warping space-time.) Quantum mechanics, on the other hand, assumes that space and time form a flat, immutable "stage" on which the drama of several families of particles unfolds. These particles can move both forward and backward in time (something relativity doesn't allow), and the interactions between these particles explain the basic forces of nature -- with the glaring exception of gravity. 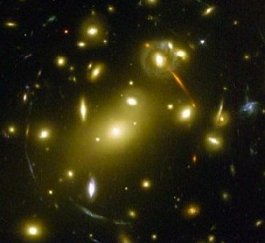 Left: Astronomers use the light-bending properties of gravity to view very distant galaxies--such as the arc shapes in this image--in a technique called gravitational lensing. [More] Credit: NASA/ESA/Caltech

The stalemate between these two theories has gone on for decades. Most scientists assume that somehow, eventually, a unifying theory will be developed that subsumes the two, showing how the truths they each contain can fit neatly within a single, all-encompassing framework of reality. Such a "Theory of Everything" would profoundly affect our knowledge of the birth, evolution, and eventual fate of the universe.

Slava Turyshev, a scientist at JPL, and his colleagues have thought of a way to use the International Space Station (ISS) and two mini-satellites orbiting on the far side of the Sun to test the theory of relativity with unprecedented accuracy. Their concept, developed in part through funding from NASA's Office of Biological and Physical Research, would be so sensitive that it could reveal flaws in Einstein's theory, thus providing the first hard data needed to distinguish which of the competing Theories of Everything agree with reality and which are merely fancy chalk-work.

The experiment, called Laser Astrometric Test Of Relativity (LATOR), would look at how the Sun's gravity deflects beams of laser light emitted by the two mini-satellites. Gravity bends the path of light because it warps the space through which the light is passing. The standard analogy for this warping of space-time by gravity is to imagine space as a flat sheet of rubber that stretches under the weight of objects like the Sun. The depression in the sheet would cause an object (even a no-mass particle of light) passing nearby the Sun to turn slightly as it went by. 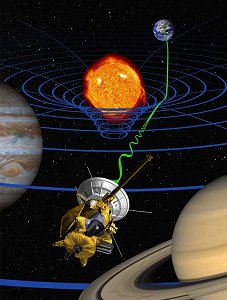 In fact, it was by measuring the bending of starlight by the Sun during a solar eclipse in 1919 that Sir Arthur Eddington first tested Einstein's theory of general relativity. In cosmic terms, the Sun's gravity is fairly weak; the path of a beam of light skimming the edge of the Sun would only be bent by about 1.75 arcseconds (an arcsecond is 1/3600 of a degree). Within the limits of accuracy of his measuring equipment, Eddington showed that starlight did indeed bend by this amount -- and in doing so effectively impeached Newton.

Right: The curvature of space due to the Sun's mass caused signals from the Cassini probe to curve on their way to Earth. [More] Credit: NASA

"I think [LATOR] would be quite an important advance for fundamental physics," says Clifford Will, a professor of physics at Washington University who has made major contributions to post-Newtonian physics and is not directly involved with LATOR. "We should continue to try to press for more accuracy in testing general relativity, simply because any kind of deviation would mean that there's new physics that we were not aware of before."

The experiment would work like this: Two small satellites, each about one meter wide, would be launched into an orbit circling the Sun at roughly the same distance as Earth. This pair of mini-satellites would orbit more slowly than Earth does, so about 17 months after launch, the mini-satellites and Earth would be on opposite sides of the Sun. Even though the two satellites would be about 5 million km apart, the angle between them as viewed from Earth would be tiny, only about 1 degree. Together, the two satellites and Earth would form a skinny triangle, with laser beams along its sides, and one of those beams passing close to the Sun. 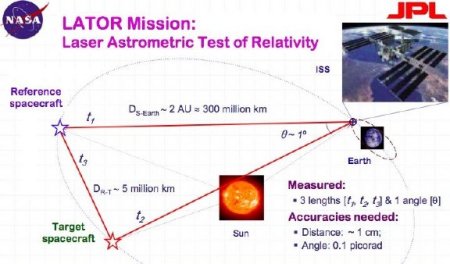 Above: A schematic diagram of the proposed LATOR mission. [Larger image] Credit: NASA

Turyshev plans to measure the angle between the two satellites using an interferometer mounted on the ISS. An interferometer is a device that catches and combines beams of light. By measuring how waves of light from the two mini-satellites "interfere" with each other, the interferometer can measure the angle between the satellites with extraordinary precision: about 10 billionths of an arcsecond, or 0.01 Âµas (micro-arcseconds). When the precision of the other parts of the LATOR design are considered, this gives an overall accuracy for measuring how much gravity bends the laser beam of about 0.02 AUs for a single measurement.

"Using the ISS gives us a few advantages," Turyshev explains. "For one, it's above the distortions of Earth's atmosphere, and it's also large enough to let us place the two lenses of the interferometer far apart (one lens on each end of the solar panel truss), which improves the resolution and accuracy of the results." 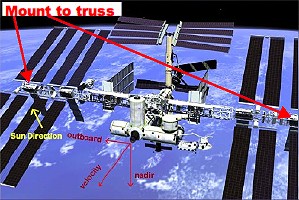 Left: The interferometer will be mounted to the solar-panel truss of the ISS, which automatically rotates to continuously face the Sun. Image courtesy Slava Turyshev.

The 0.02 Âµas accuracy of LATOR is good enough to reveal deviations from Einstein's relativity predicted by the aspiring Theories of Everything, which range from roughly 0.5 to 35 AUs. Agreement with LATOR's measurements would be a major boost for any of these theories. But if no deviation from Einstein is found even by LATOR, most of the current contenders--along with their 11 dimensions, pixellated space, and inconstant constants--will suffer a fatal blow and "pass on" to that great dusty library stack in the sky.

Because the mission requires only existing technologies, Turyshev says LATOR could be ready to fly as soon as 2009 or 2010. So it may not be too long before the stalemate in physics is broken and a new theory of gravity, space, and time takes the throne.