Progress 14 Arrives at Space Station
It wasn't Christmas in May, but it might have been the next best thing. An unpiloted Russian cargo craft smoothly linked up to the International Space Station Thursday morning, delivering 2.5 tons of food, fuel, water, equipment and supplies to the two crewmembers. 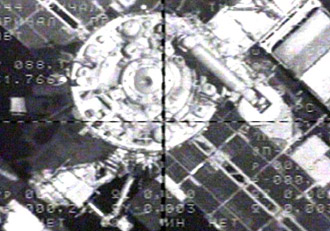 Image on right: In this view from a camera on the ISS Progress 14 spacecraft, the cross hairs close in on the aft end of the International Space Station's Zvezda Service Module before docking. Credit: NASA TV.

Also aboard were food treats, requested DVD movies and books.

Padalka and Fincke had been ready to take over manual control of the Progress if necessary. But the cargo craft's automatic docking system brought it to the docking port just as programmed.

Its predecessor, Progress 13, was undocked from the ISS on Monday. With a load of trash aboard, it was moved to a parking orbit where Russian engineers are doing tests aimed at developing methods for future Progresses to save fuel. Progress 13 will be deorbited on June 3 to burn up in the atmosphere.