From Simulation to Space, Raffaello Prepares for Launch
A unique "moving van" is getting ready to haul a big load of supplies to space. But first comes precision, pre-flight practice.

The Multi-Purpose Logistics Module (MPLM) is essentially a "moving van" that transports supplies to the International Space Station. The module, named Raffaello, will make its third trip to space on the next Space Shuttle mission, STS-114. 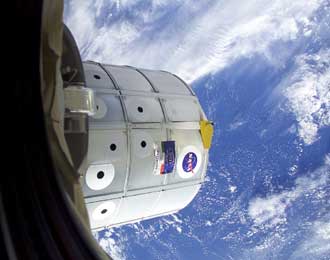 Raffaello is at NASA's Kennedy Space Center, Fla., being prepared for flight in May of 2005. It will deliver such supplies as lamp housing assemblies to replace interior lights, batteries and a photo and TV re-supply kit with new camera lenses and videotapes.

Raffaello is a cylindrical module, about 21 feet long and 15 feet in diameter, weighing almost 4.5 tons. It can carry up to 10 tons of cargo packed into 16 standard racks.

Raffaello, Leonardo and Donatello are three MPLMs managed by NASA's Marshall Space Flight Center in Huntsville, Ala. They were designed by the Italian Space Agency and made in Italy under an agreement with NASA, in exchange for Italian access to U.S. research time on the Space Station.

A six-member team from Marshall’s MPLM group recently participated in a simulation of Space Shuttle Discovery's Return to Flight mission at Johnson Space Center in Houston. During the 36-hour simulation, the team operated from the Mission Control Center, and the astronaut crew members -- who also participated in the simulation -- were in a Shuttle simulator in another building.

"This exercise provides an excellent opportunity to re-familiarize ourselves with the processes, systems and protocols associated with a mission," said Shawn Reagan, project manager for the MPLM at Marshall. "It has been more than two years since we have flown one of our modules, so it is important to be at the Mission Control Center again in order to work efficiently."

The simulation began one day, 12 hours and 45 minutes into the mission -- just as the crew prepared to move Raffaello from the Shuttle's cargo bay and attach it to the Space Station. The Marshall team monitored the simulated move -- a move that involved a first. The Space Station’s robotic arm will move the module from the Shuttle to the Station. In previous MPLM flights, the Shuttle's robotic arm has been used to make the transfer. 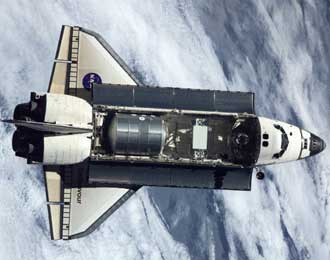 Image right: The Space Shuttle Endeavour, controlled by the flight crew of STS-108, is backdropped over a large area of cloud cover on Earth as it nears its rendezvous with the International Space Station (ISS). The Raffaello logistics module that is being brought up to the orbiting outpost is clearly visible in Endeavour's cargo bay. Image credit: NASA/JSC

During the transfer, the team must make critical decisions that could affect the mission, including monitoring the module's interior temperature readings to avoid moisture build-up. In this simulation, the team faced the challenge of deciding whether condensation would build inside Raffaello if its shell heaters could not be used when the module was moved from the Station back to the Shuttle.

The heaters, mounted on the exterior walls of the module, are routinely used to match the temperatures of the Shuttle and the Station. Although the simulation ended before a final decision was made, the Marshall team completed analysis that showed how quickly condensation would begin to form and how quickly freezing would occur without the use of the heaters.

"It’s just one of the things that could happen to us and we have to be prepared," said Reagan. "These are excellent exercises to ensure we make the best decisions."

The Marshall Center continues working with the Environmental Control and Life Support System, Nodes and the Payload Operations Center -- the command post for all science activity aboard the Space Station, all supporting the Space Station Program Office at Johnson Space Center.