They replaced and installed new equipment outside the Station. Some of that equipment, three new antennas, will help guide the new Automated Transfer Vehicle (ATV) to its first docking to the Station late next year. 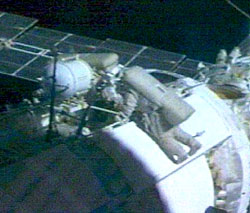 Image to right: Expedition 9 crewmembers work on the first task of their fourth spacewalk, installing a pump panel on the exterior of the Zarya Control Module.

Read Walking in the Void for some interesting facts and figures about spacewalking.

Wearing Russian Orlan spacesuits -- Paldalka's with red stripes, Fincke's with blue -- they used the airlock of the Pirs Docking Compartment. Hatch opening, beginning the spacewalk, was at 12:43 p.m. EDT.

The first task during the spacewalk was replacement of a pump panel atop the Zarya module. It is part of the ISS Russian segment cooling system. This replacement was done as the panel approached the end of its designed service life. It took about an hour.

Pump panel sensors monitor coolant levels and temperature and regulate the amount of coolant flowing through a radiator. The higher the temperature, the greater the coolant flow through the radiator.

Next the spacewalkers installed fairleads, called "pigtails" because of their circular shape, on Zarya handrails. Their function is to keep Russian spacesuit tethers from touching delicate experiments or equipment outside the Station or snagging during spacewalks.

Two were installed just before an orbital sunset. During darkness, Padalka and Fincke rested for about 30 minutes and remained still for 15 of those minutes as part of a Motionless Test. It was designed to see how spacewalkers affect the attitude, or orientation in space, of the ISS. Two additional fairleads were installed after that test.

Installation of the three ATV antennas and associated cables at the rear of the Zvezda Service Module went smoothly. Attitude control thrusters were disabled then, for the crew's safety. The European Space Agency's ATV is similar in some respects to the Russian Progress unpiloted cargo spacecraft, but it has a cargo capacity about 2.5 times that of the Progress. Its first flight is scheduled for the fall of 2005.

The site is not far from the three laser reflectors and other antennas for the same system they installed during their Aug. 3 spacewalk. Three additional antennas will be installed during an Expedition 10 spacewalk scheduled for February.

Expedition 10 crewmembers, Astronaut Leroy Chiao, commander, and Flight Engineer Salizhan Sharipov, are to be launched from the Baikonur Cosmodrome in Kazakhstan to the Station Oct. 9. Sharipov's fellow Cosmonaut Yuri Shargin will fly to the ISS with Expedition 10 and return to Earth with Expedition 9.

Finally, just before re-entering the Pirs, Padalka installed three of four handrail limiters near the airlock's hatch No. 2. These are covers that protect the handrails and act as a cushioning doorstop for the hatch. The fourth cover would not fit, a minor issue.

The spacewalk was completed earlier than scheduled largely because the spacewalkers continued working through some of the periods of orbital darkness instead of resting.

The spacewalk was the fourth for Fincke and the sixth for Padalka.
› Back To Top