Commander Leroy Chiao and Flight Engineer Salizhan Sharipov installed a work platform, mounted a robotics experiment, checked the vents on systems that help control the Station's atmosphere and installed a scientific experiment during the 5-hour, 28-minute spacewalk that began at 2:43 a.m. EST. 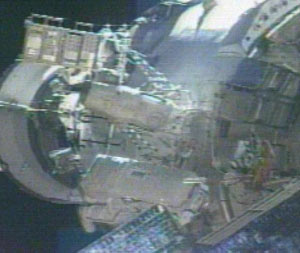 They completed their work and re-entered the Pirs docking compartment, closing its hatch at 8:11 a.m. EST. Most of the work was done outside the Zvezda Service Module. Sharipov and Chiao wore Russian Orlan spacesuits. This was Chiao's fifth spacewalk and Sharipov's first.

After opening the hatch and assembling equipment, Sharipov and Chiao moved from Pirs back to about the middle of the Zvezda. There they installed a Universal Work Platform -- a kind of space work table -- and its base, along with associated wiring.

Next they installed on the work platform the European commercial experiment Rokviss (Robotic Components Verification on ISS). That experiment explores the use of manipulator rotary joints, operated from inside Zvezda via a receiver-transmitter or from the ground.

Rokviss is designed to study remote operation of such joints and the effects of space on them. The German device could help lead to a new generation of space robots.

Sharipov and Chiao worked together to move the Japanese MPAC&SEED (Microparticle and Capture & Space Environment Exposure Device) experiment to a new location on its rail-like mounting. That experiment exposes various materials to space. At the old MPAC&SEED location they mounted a Rokviss antenna, then ran and connected cables to link a transceiver with the experiment and the antenna.

Still outside Zvezda, they inspected and photographed gas vent nozzle extenders including those of the Elektron and Vozdukh. Both the Elektron, which divides water into its components, oxygen for the Station's interior and hydrogen, which is vented overboard, and Vozdukh, a carbon-dioxide scrubber, have experienced some glitches recently. The inspection was designed to help determine if the vents could be part of the problem.

The spacewalkers reported they saw a black residue around the vent's base and a white, honeycomb-like or oily residue on some of the vents themselves.

Once that task was finished, Sharipov and Chiao moved with their tool carrier back to Pirs.

Their last scheduled task was to install the Russian Biorisk experiment on the outside of the Docking Compartment. It looks at the impact of spaceflight on microorganisms. Eventually information from the experiment could be used to keep us from contaminating other planets with Earth's microorganisms, or perhaps even to protect our own planet.

Telemetry indicated a problem with the power supply to the Rokviss antenna installed early in the spacewalk. Sharipov and Chiao returned to the antenna site to remate connectors of cabling they had installed. Telemetry showed that had solved the problem.

Live television was not available during some of the spacewalk. Because of the orientation of the Station and the angle of the sun, the Ku band antenna that sends down television got colder than its low temperature limit. As a result, flight controllers repeatedly "parked" the antenna. Station video cameras recorded the spacewalk for later downlink.

This was the 57th spacewalk to assemble and maintain the Station. It was the 32nd spacewalk from the Station itself, and the 14th from Pirs.

A second spacewalk for Chiao and Sharipov is scheduled for March. During that spacewalk, they will install navigational and communications equipment for the arrival of the first Automated Transfer Vehicle cargo craft.

The ATV is an unpiloted cargo carrier similar in some ways to the Russian Progress spacecraft, but it has more than double the cargo capacity of the Progress. It is scheduled to make its first flight late this year.
› Back To Top