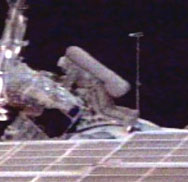 The residents of the International Space Station have conducted the first ever two-man spacewalk without a crewmember inside, but the planned five and a half hour-spacewalk was cut short by a cooling system problem with one of the Russian Orlan suits.

The spacewalk by Expedition 8 Commander Mike Foale and Flight Engineer Alexander Kaleri proceeded smoothly and problem-free for almost three hours until Kaleri reported that drops of water were beginning to form inside his helmet visor and that his suit temperature was a little warm.

Within minutes, Russian flight controllers reported an apparent failure of the system that provides cooling for Kaleri's suit. Despite the problem, Kaleri was never in any danger and suit temperatures never rose to uncomfortable levels.

The crew went back inside the Station, and Foale quickly detected a kink in one of the tubes in Kaleri's liquid cooling garment that provides the flow of water throughout the suit. The kink was straightened out and water began to flow once again normally in Kaleri's suit.

Foale and Kaleri began their spacewalk at 4:17 p.m. EST. It was the first time the Station had not been occupied during a so-called "extravehicular activity," and all Station systems operated flawlessly in their autonomous configuration during the abbreviated spacewalk.

Before the activity was cut short by the suit problem, Foale and Kaleri were able to complete about 60 percent of their planned tasks, including installation of a device called the Matryoshka, which will provide data on radiation exposure to the human body during space flight.

They also removed one panel and relocated another for the Japanese Aerospace and Exploration Agency's MPAC-SEEDS (Micro-PArticles Capture/Space Environment Exposure Device) experiment. This experiment is studying micro-meteor impacts. And they installed cassettes for a experiment studying the effect that the harsh environment of space has on materials.

The crew was not able to retrieve of a set of retroreflectors from the aft end of the Zvezda Service Module. That task was planned to prepare for next year's maiden arrival of a new European supply ship.

Also, the spacewalkers weren't able to replace the Kromka experiment, which measures thruster residue on Zvezda.

Kaleri and Foale closed the hatch to the Pirs Docking Compartment at 8:12 p.m. EST, bringing the spacewalk to a close after 3 hours, 55 minutes.

It was the 52nd spacewalk in support of Station assembly and maintenance, the 27th staged from the Station itself, the fourth for Foale and Kaleri's fifth.