Walking in the Void
Venturing into the vacuum of space, with its extreme temperatures and the challenges of weightlessness in what amounts to a personal spacecraft, can never become routine. Yet humans have made more than 250 spacewalks, 143 of them by NASA astronauts.

Perhaps the most famous of all spacewalks were the 15 made on the moon, including the first step onto another planetary body by Neil Armstrong. 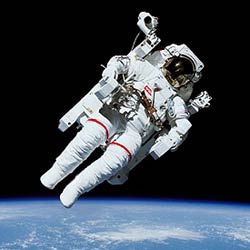 Image to right: Astronaut Bruce McCandless II, mission specialist, participating in a historic Extravehicular Activity (EVA), is a few meters away from the cabin of the Earth-orbiting Space Shuttle Challenger in this 70mm frame. This EVA represented the first use of a nitrogen-propelled, hand-controlled device called the Manned Maneuvering Unit (MMU), which allows for much greater mobility than that afforded previous space walkers who had to use restrictive tethers. Robert L. Stewart, mission specialist, later tried out the MMU McCandless is using here. The two of them tested another similar unit two days later. Inside the spacecraft were Astronauts Vance D. Brand, commander; Robert L. Gibson, pilot; and Ronald E. McNair, mission specialist.

Spacewalks have given us unforgettable images -- from the very first U.S. spacewalk by Ed White outside Gemini 4 in June 1965 to the most recent spacewalk by International Space Station crewmembers on Aug. 3. Among the best of those images:

--Astronaut White's 36-minute outing was difficult without benefit of handholds or foot restraints, but still so exciting that he said returning to the capsule was "the saddest moment of my life."

--Bruce McCandless was a small white image against the blackness of space in February 1984 as he maneuvered in a personal jet pack more than 100 yards away from Challenger and, moving at about 5 miles a second, flew formation with the mother ship before returning.

--Joe Allen, holding the 9-foot, 1,200-pound, $90 million Palapa B2 communications satellite above his head for an entire orbit of the Earth during preparations to attach it to a Shuttle cargo bay pallet for return home. The satellite was recovered by Discovery in November 1984 after it had been stranded in a useless orbit by a malfunctioning booster. It was later refurbished and relaunched on an expendable rocket.

--The flood of images from spacewalks devoted, like the most recent one, to assembly, maintenance and science at the International Space Station are a series of views of progress of a great engineering work. The first spacewalk at the ISS was one of three during the December 1998 flight of Endeavour that brought the second ISS element, the Unity Node, into space.

The next Station spacewalk is scheduled for early September.

All in all, there have been 57 spacewalks at the ISS -- 25 from Space Shuttles and 32 based from the Station itself. Total time of ISS spacewalks is 338 hours and 17 minutes. That's about 14 days.

The history of U.S. spacewalks parallels the history of the nation's space program. Nine were done from Gemini capsules, five from outside Apollo command modules and 15 on the surface of the moon. Skylab was the base for 10 spacewalks.

Three Americans did spacewalks from the Russian Mir space station. In addition to ISS-based spacewalks, a total of 74 have been done from Space Shuttles. 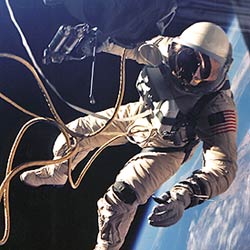 Image to right: Astronaut Edward H. White II, pilot for the Gemini-Titan IV (GT-4) spaceflight, floats in the zero gravity of space during the third revolution of the GT-4 spacecraft. White wears a specially designed space suit. His face is shaded by a gold-plated visor to protect him from unfiltered rays of the sun. In his right hand he carries a Hand-Held Self-Maneuvering Unit (HHSMU) that gives him control over his movements in space. White also wears an emergency oxygen chest pack; and he carries a camera mounted on the HHSMU for taking pictures of the sky, the Earth and the GT-4 spacecraft. He is secured to the spacecraft by a 25-foot umbilical line and a 23-foot tether line. Both lines are wrapped together in gold tape to form one cord. Astronaut James A. McDivitt, command pilot, remained inside the spacecraft during the extravehicular activity.

The Russians have done 112 spacewalks, including the first. Cosmonaut Alexei Leonov stepped out of the Voshkod 2 spacecraft in March 1965. He traveled about 3,500 miles during his 12-minute outing.

Two Russians did spacewalks from Space Shuttles and 75 Russian spacewalks were outside Mir.