Listen to this story via streaming audio, a downloadable file, or get help. 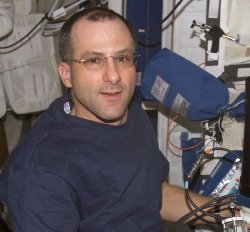 Like the other members of the International Space Station's 3-person crew, he's busy most of the week doing research and building the ISS, where he's been living for the past three months. "Saturday is when we have a bit of free time," Pettit says. Some of the crew read books, play musical instruments or watch movies. "I prefer to do 'Saturday Morning Science' -- fun experiments of my own design."

Right: International Space Station science officer Don Pettit. Don is a member of ISS Expedition 6. He's been in space since Nov. 2002. You can read more about his experiences here.

A few Saturdays ago, he had his heart set on bubbles. "We have a copy of C. V. Boys' book Soap Bubbles here on the ISS. It was published in 1911 and it's still a wonderful treatise on thin films. Every space station should have a copy," he laughs. "I wanted to see what thin films and bubbles might do in zero-g and felt it was a topic ripe for discovery."

Pettit prepared a solution of water, soap, and glycerin, and fashioned a bubble-wand from thin wire -- a loop that could be re-sized from 3.5 cm (about 1.5 inches) to more than 15 cm (6 inches) in diameter. The experiment was ready. "But first," recalls Petit, "I decided to try a 'dry run' with water only, no soap."

He inserted the wand into a zero-g beaker and pulled it out again. "To my amazement," he says, "when the 2-inch loop was withdrawn, a thin film of water clung tenaciously to the loop. I've never before witnessed such a large-scale film of water."

To fully appreciate Pettit's discovery, just try the experiment in your own kitchen (on Earth). Fill a bowl with drinking water and fashion an adjustable loop of wire. No matter how hard you try, it's impossible to make water stretch across a loop wider than about 1 cm (0.4 inches). Any film you do make, furthermore, will be fragile. A gentle bump or breath of air will cause it to burst.

Pettit's films, on the other hand, were 5 to 11 cm (2 to 4 inches) in diameter and remarkably sturdy. He could shake them vigorously, blow on them ... even paint on them. "They were like little sheets of rubber," he marveled. "They could withstand all sorts of mechanical torture."

Surface tension is what allows water bugs to scamper across ponds without sinking. It's a stretchy "skin" across any wet surface that resists penetration. This skin exists because water molecules are electrically charged. The positive end of one molecule is drawn to the negative end of another: water literally clings to itself!

The electrical attraction between water molecules, and thus the surface tension of water, is the same on Earth and in space. There's no difference.

Right: Cohesive forces between water molecules are greatest near the surface. Click on the image to find out why.

What is different is the competition between surface tension and gravity.

Let's say you're on Earth and you have a thin film of water held parallel to the ground. The pull of gravity causes the film to sag in the middle. Water drains downward from the edge of the loop; a little pool forms. The film sags more. The pool gets bigger and bigger until its weight rips the film apart.

If you're in Earth orbit, however, the film would be in free fall -- weightless. The film doesn't sag. The central pool never forms. Surface tension therefore wins the competition with gravity, and the result is a sturdy long-lasting membrane. "Some of our films lasted longer than 12 hours," notes Pettit.

What do you do with a membrane of water? The entertainment value alone is impressive.

Pettit spent some time simply making the wand bigger and smaller. "Oscillating the loop with a period of about 2 seconds distorted the film with remarkable patterns like you might see in a rubber membrane driven by a sound oscillator. The back-and-forth displacement at the center was several centimeters."

Next, Pettit injected some tiny mica flakes into the film. This allowed him to observe otherwise-hidden flows and swirls. "I blew on the film using my own breath," says Pettit, and fascinating patterns emerged -- some that looked like spiral galaxies. "These tracer particle patterns lasted for well over four hours."

Then it was time to paint. On one film, Pettit deposited four drops of food coloring: red, blue, green and yellow. Using a syringe with a thin tip (a canella), he shot a stream of air across the watery canvas, pushing the colors to and fro. One of his paintings looked like an eagle, others like abstract art.

"I wonder what someone like Matisse could do with this ephemeral medium?" wonders Pettit. "Eventually, all the colors blended together yielding a rather dull looking green. I think we've discovered the true color of the Universe!" he joked.

Seriously, though, these films highlight the value of space for fundamental research in fluid physics. Fluid flows on Earth are complicated by gravity-driven convection and 3D motions. A 2D film of weightless water is a splendid research tool that could yield data of value to many industries on Earth. 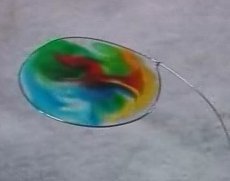 Meanwhile, Pettit hasn't forgotten his original experiment: "We never got to the soap solution because we were diverted by plain water. We'll do soap bubbles on another Saturday," he says.

What will they reveal? No one knows.

"Observations of nature, no matter how seemingly arcane, are like peeling off one more layer from the great onion of knowledge, tickling your imagination with what you have found but always revealing yet another tantalizing layer underneath," says Pettit.

"I hope we never get to the core."

Editor's note: Science@NASA will publish a series of stories about Don Pettit's Saturday Morning Science activities in the weeks ahead. Stay tuned! And while Don's experiments are done for fun, motivated by his own curiosity, there is also serious scientific research underway involving fluids and foams in microgravity. We'll report on those experiments in an upcoming story.

NASA Marshall Space Flight Center
Huntsville, Ala.
› Back To Top