Taking Food With You 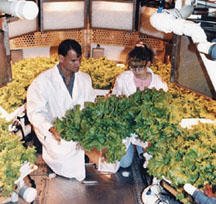 It would be hard to imagine life without plants. Not only are plants an almost unavoidable sight in our everyday lives, life on Earth as we know it would be impossible without plants. Plants are a vital source of the food we eat and the air we breathe.

Just like plants are an important part of life here on Earth, NASA believes that plants could someday be an important part of life in space as well. As astronauts spend longer amounts of time in space, thanks to the International Space Station (ISS), NASA is looking into whether plants could be used to make their stays easier. Growing plants onboard the ISS could provide crew members with a continuous supply of fresh food. Plants would even be used to help improve the air supply onboard a spacecraft by producing oxygen and removing carbon dioxide. And when man eventually journeys to other worlds, plants could make it easier to establish a foothold elsewhere in the solar system. 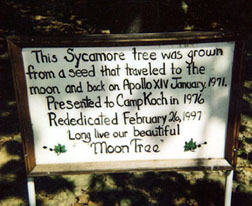 In order to find out how to accomplish these things, NASA has been performing research on how plants respond to spaceflight. Water is a valuable commodity in spaceflight, and is vital to the growth of plants. But, plants can be used to recycle and purify water for use by the crew. And while space is infinite outside a spacecraft, it's pretty limited inside, meaning that plants will not be able to take up much space. For that reason, NASA is investigating dwarf varieties of crop plants, such as wheat and rice, which only grow to be a foot or so tall. NASA is also doing research in growing plants in hydroponics, which means that no soil is needed. Gravity is even an important part of plant growth on Earth. Plants use gravity to direct which way their roots should grow and which way their shoots should grow. For plants to become a practical part of spaceflight, NASA has to learn how these limitations can be overcome. Towards that end, the space agency has been conducting research on plants for years, and has flown plants onboard the Space Shuttle and Space Station to learn more about how they grow in space.

While animals have been space travelers even longer than humans (beginning with the 1957 launch of the dog Laika on Sputnik 2), plants have also long been a part of spaceflight. One of the most famous early examples is the "Moon trees" from Apollo 14. One of the astronauts on that lunar mission in 1971 was Stuart Roosa, a former "smokejumper," a firefighter for the U.S. Forest Service. Astronauts were allowed to carry a small kit of personal items with them during spaceflight, and Roosa chose to take something connected to his former occupation -- a collection of several species of tree seeds. After the seeds were brought back from their trip around the Moon, the Forest Service planted them to see if they would still grow properly after being exposed to microgravity. They did, and the Forest Service ended up with hundreds of little "Moon trees." With nowhere to grow them all, the service began giving them away to organizations across the country. Many of the trees are still around today, and new second-generation Moon trees are still being planted. 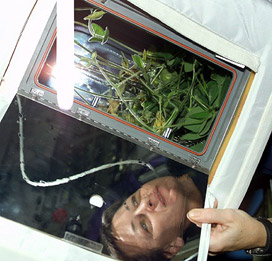 Experiments involving space plants have been a favorite of astronauts, especially those making long-duration stays onboard the International Space Station. ISS crew members have commented on how much they liked having an experiment onboard in which soybean plants were grown from seeds. After months in the metal and plastic environment of the Space Station, the astronauts said they missed seeing the plant life so ubiquitous on Earth, and would sometimes open up the soybean growth experiment just as a reminder of what plants looked and smelled like... a little bit of home in a box. "It was surprising to me how great soybean plants looked," ISS Science Officer Peggy Whitson wrote in one of her "Letters Home." "I guess seeing something green for the first time in a month and a half had a real effect. I think it's interesting that the reaction was as dramatic as it was." Researchers said that plants grown on the Station that were brought back to Earth for study returned in excellent condition. NASA hopes that eventually astronauts will be able to grow some of their own food onboard their spacecraft. In addition, researchers hope that the data gained from these experiments will also lead to ways to improve crops grown on Earth.

Millions of school children have even been involved in some of NASA's space-based research on plants. In 1984, 12.5 million tomato seeds were left in space onboard a special satellite. After 6 years, astronauts on the Space Shuttle Columbia recovered the satellite and brought the tomato seeds back to Earth. The seeds were distributed to school children all over the United States and in dozens of foreign countries, so that the students could help NASA research the effects of spaceflight on the plants. Students were asked to grow and compare the space-exposed tomato seeds and their Earth-bound cousins. The students found that the space tomatoes were just as healthy as the Earth tomatoes, and in some cases were even "tastier, juicier, and sweeter!" As a result of the students' research, NASA now knows that seeds can survive in space for long periods of time with little or no change in the resulting plant. Not that all of the school-based research was without any problems. One report from a child in Ontario said: "Dear NASA: Hi, my name is Matt. I am in grade 2. I really enjoy growing my plants. Here are my results. My Earth seed did not grow. My space seed grew, but it fell off my desk. It died." One student even reported that his resilient space tomatoes even survived being severely damaged by a rebounding basketball from his sister's three-point shot. 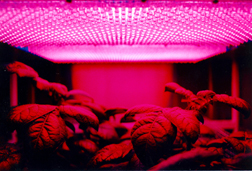 NASA's spaceflight-related research on plants even has down-to-Earth benefits that people can take advantage of in their own homes. Information that NASA discovered on how plants could be used to remove pollution from the air in spacecrafts can be used to help make the air in people's houses cleaner as well.

As man continues to explore space and prepares to journey out into the solar system, plants could be important partners in that exploration. Maybe the "Moon trees" growing on Earth today will be able to grow alongside "Mars trees" someday.

NASA's Human Exploration and Development of Space Enterprise
Published by NASAexplores: February 20, 2003
› Back To Top