UFO No Longer Unidentified
UFOs aren't necessarily alien spacecraft. And some purported UFOs aren't UFOs at all. Take the example from Apollo 16. 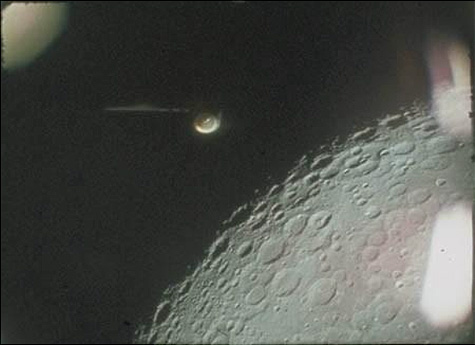 Image above: High-resolution, digital scan of a full frame from the original Apollo 16 film showing the object in question (top center) and its position relative to the moon. Reflections in the window are also visible (left and right). Credit: NASA

Beginning their return from the moon to an April 27, 1972, splashdown, Astronauts John Young, Thomas Mattingly and Charles Duke captured about four seconds of video footage of an object that seemed to look a lot like Hollywood's version of a spacecraft from another world. 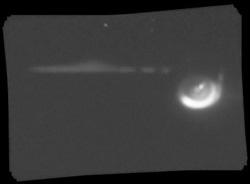 Image on right: Image enhancement of the object and linear feature. Credit: NASA

The thing was described as "a saucer-shaped object with a dome on top." The images were captured with a 16mm motion picture camera shooting at 12 frames per second from a command/service module window. The object appears momentarily near the moon. As the camera pans, it moves out of the field of view. It reappears as the camera pans back. It appeared in about 50 frames.

Some very bright people recently worked hard to analyze that footage. Their conclusion was that the object wasn't at all what some observers thought it seemed to be. There is no indication the Apollo 16 crew ever thought the film showed anything special.

A group headed by Gregory Byrne of Johnson Space Center's Image Science and Analysis Group completed a report on its investigation earlier this year. They used a video copy of the film initially, then did a high-resolution digital scan of the original film for detailed analysis. 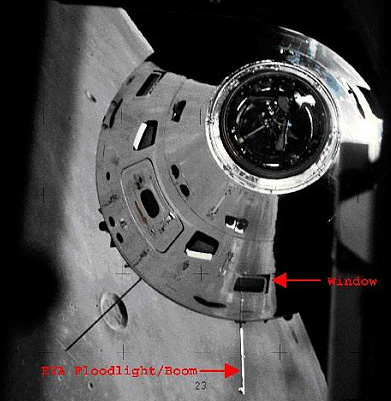 Image on left: View of the Apollo Command/Service Module from the Lunar Module during Apollo 17 showing the location of the EVA floodlight/boom. Credit: NASA

They stabilized images to correct for camera movement, and then aligned multiple frames in a sequence. One thing that showed them was that the object appeared to move slightly with respect to the moon, because of parallax brought about by slight camera motions and the nearness of the object to the camera.

The investigators also combined several frames in a sequence, to give them higher resolution and greater contrast than individual frames. The combinations showed them more clearly a "linear feature" attached to one side of the object. They also looked at archived images from other Apollo missions.

Bottom line: "All of the evidence in this analysis is consistent with the conclusion that the object in the Apollo 16 film was the EVA [spacewalk] floodlight/boom. There is no evidence in the photographic record to suggest otherwise." 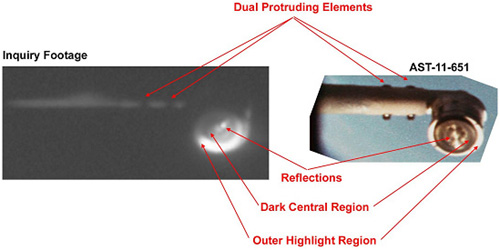 Image above: Enhanced Apollo 16 image (left) compared with features of the EVA floodlight/boom from the perspective of a Command/Service Module window (right). Credit: NASA