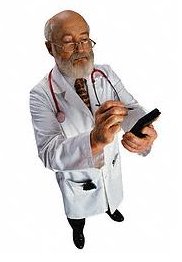 Traveling can be tough on the body. Think about driving all the way from, say, Washington to Wisconsin. By the time you ease yourself from behind the wheel, your back hurts, your eyes ache, your hands are cramped. And the farther you go, the more your body suffers. If you fly to France, you're hit by radiation. If you visit the space station, you lose gravity.

Now imagine you're heading for Mars: low gravity, radiation exposure, a six month trip spanning millions of kilometers. Without some kind of "countermeasures" to protect you, your muscles will shrivel, your bones could weaken, your genes might be damaged and confused. When you arrive, you might find it hard to even get out of your spaceship without stumbling and hurting yourself.

When you take a long car trip, you just have to get out every now and then to stretch your legs. Countermeasures for a trip to Mars? Well, they're going to be a tad more elaborate than that. Nevertheless, countermeasures do exist--or at least they can be developed.

One of the biggest problems in keeping astronauts fit and healthy as they travel through the solar system is simply preventing the physiological changes caused by weightlessness, says Dave Williams, director of Space and Life Sciences at the Johnson Space Center. Muscle atrophy and bone loss are perhaps the best known alterations, but they're hardly the only ones. Weightlessness causes a loss of blood volume, which means that astronauts newly-landed on a planet (Earth or Mars, say) tend to feel lightheaded when they stand up. Weightlessness also alters the sense of balance so that, for a while after astronauts return to 1-g, they feel like the world is spinning whenever they move their heads. 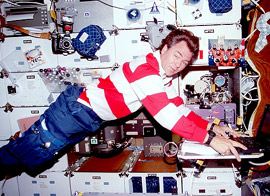 Even subtler changes are beginning to be discovered. Here on Earth, we have no trouble sensing the position of our limbs: if you decide to lift your arm, you know where it is, and how much farther you need to move it to get it where you want it to be. But in space, this "proprioceptive" ability doesn't seem to work as well. And there may be other problems: slower wound healing and immune system weaknesses, for example.

Right now, the chief countermeasure recommended by space doctors is simply exercise. Astronauts on the International Space Station work out about two hours a day, using treadmills, exercise bikes, and an IRED--a device specially developed to allow astronauts to do resistive or strength training. Medications, too, may help with some problems: biphosphonates, for example, used on Earth to slow the rate of bone loss in osteoporosis patients may prove useful for astronauts, too.

"It's very compelling as a solution," says Williams.

In theory, providing artificial gravity is easy. Ordinary laboratory centrifuges do it all the time. When they spin, their contents are pressed outward away from the axis of rotation. It's a force that feels like gravity.

Rotating an entire space ship, however, can be both costly and complex. That's why researchers at the NASA Ames Research Center have been developing a small, human-powered centrifuge. It's essentially an exercise track, in which an astronaut pedals a bike up and around a 360 degree circle.

By pedaling the bike around the track, explains Williams, you turn yourself into a human centrifuge. "Depending on the speed at which you're going, and the size of track, you'll experience a pseudo-force ... a gravity substitute."

This kind of human-powered device would provide an intermittent exposure to artificial gravity. Researchers must still figure out how much of this pseudo-gravity is needed to keep astronauts fit. Furthermore, the force created by such a device would feel stronger at the astronauts' feet than at their heads! But it might be enough like home to counteract the effects of zero-g.

Bicycles won't solve everything, though, because weightlessness is only one problem. 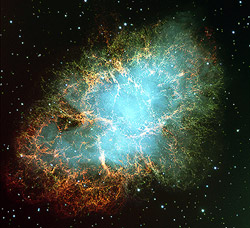 Radiation is another. Right now, the countermeasure for radiation is limiting astronaut exposure--which means limiting the amount of time they're allowed to be in space. But on an long-term mission of exploration, the astronauts will have to be in space for months on end, and, importantly, the type of radiation in deep space is more damaging than the kind in low earth orbit.

An exploration class spaceship will have to include shielding that can absorb cosmic rays.

The best material to block high-energy radiation is hydrogen, explains Frank Cucinotta, astronaut radiation health officer and manager for Space Radiation Health Research at the Johnson Space Center. "But you can't make a shield out of pure hydrogen, so we look for materials than have a high hydrogen content, like polyethylene, a common plastic, which is 1 carbon and 2 hydrogens." Water, he says, with one oxygen and two hydrogens, would be almost as good, but it's awfully heavy and expensive to launch.

To completely block radiation, hydrogen-rich shields would need to be a couple of meters thick--impractical, because of the weight and volume. But, oddly, 30 to 35 percent of the radiation can be blocked by shields just five to seven centimeters thick. That, suggests Cucinotta, might be the most efficient choice.

Astronauts would still need to cope with the 70 percent of the radiation that's getting through the shields. So Cucinotta and his colleagues are looking at other solutions, like medication. 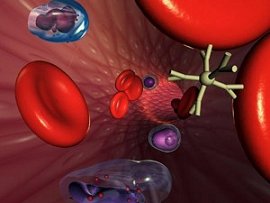 Antioxidants like vitamins C and A can help by sopping up radiation-produced particles before they can do any harm. NASA scientists are also looking for ways to help the body after the damage has been done. One, for example, may have found a way to instruct a damaged, abnormal cell to destroy itself. Another researcher is exploring the cell cycle: as a cell divides, it pauses occasionally, to check its genes for any kind of damage and to repair errors. With pharmaceuticals that lengthen this part of the cycle, researchers believe they can give the cell more of a chance to fix its own problems.

Even if we could prevent the damage caused by radiation and weightlessness, that would still be only part of what's needed to explore Mars and beyond. "The other element," says Dave Williams, "is the diagnosis and treatment of disease." Because, as healthy and fit as astronauts are, the possibility exists that some medical problem could arise during long missions. Astronauts will need to treat any such illness or accident by themselves, using only the tools they've carried with them.

This means developing technologies that are as smart and as capable as possible. It means developing expert systems that can work effectively regardless of the training of the people who are operating them. (A doctor would be a key part of any long-term mission, of course, but what if the doctor got sick or disabled? Other members of the crew would have to help.) 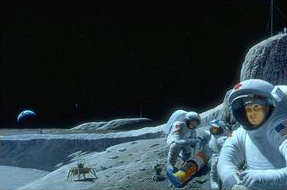 Millions of miles from the nearest hospital, space doctors will need advanced medical technology: miniaturized devices to perform minimally invasive surgeries; robot helpers with super-steady hands; smart medical systems that can diagnose, and perhaps even treat, illnesses; and telemedicine capabilities that will allow the ship's chief medical officer to consult with experts back on Earth.

In fact, many of these devices are already being developed on Earth.

External defibrillators are a good example, says Jim Logan, manager for the Medical Informatics and Health Care Systems Office at the Johnson Space Center. These devices, which use electrical shocks to restart a patient's heart, are good examples of a smart medical system. "The expertise," says Logan, "is all local, resident in the machine." The device itself can decide whether it's been hooked up correctly, whether the patient needs to be defibrillated, and if it decides that the answer is yes, it just goes ahead and provides the treatment. That kind of capability, which contains all its expertise in a tiny, lightweight, easy-to-use package, is a key part of what's needed to provide clinical care on a long-term exploration mission. 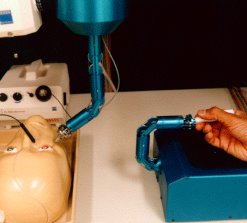 Robotically assisted surgery might also play a role. In space, minimally invasive surgery will be important. You don't want to make large incisions: wounds may be slower to heal and fluids like blood harder to control. By using robots, which can make steadier, more even movements that a human hand, surgeons can make smaller, finer incisions than they could on their own.

Telemedicine will be a another key tool, and that too is already being explored. "We have at JSC a teledermatology clinic based on the principles of space flight medicine," says Williams. "If you come into the clinic with a skin rash, we take a high-resolution digital image of the rash and send it to an expert over the Internet. The dermatologist gives a diagnosis, and recommends treatment." The patient doesn't need to be seen in person. For all the doctor knows, they could be on Mars.

Possible technologies abound. Consider a device that could produce medicines from stored substrates--only when the medicines were needed. Long term exploration missions are likely to exceed the life of many pharmaceuticals, explains Logan. But if you could produce pharmaceuticals as you needed them, he says, then shelf life might be much less problematic.

This so-far hypothetical device would solve another problem, too. "Say someone invented a new antibiotic after you had already left Earth. You can't upload [pills], but you can upload software. So if you had the capability of manufacturing your medications on the fly, you could simply upload the structure of the new drug, and make it right there." 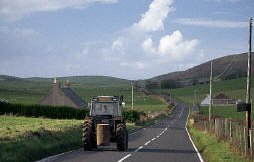 The technologies needed for long term exploration of the solar system are the same that are needed to provide quality medical care to an isolated rural community or to treat soldiers in the field. Many of these capabilities already exist, at least in some early form. But researchers want to make them smaller, lighter, more power-efficient, smarter, and more effective.

"Our goal," says Williams, "is to extend the distance that humans can go in space, and to increase the time that they can stay there." Space is a tremendous driver for the development of new technologies, he believes. "And the technologies that we develop to move beyond low earth orbit are truly going to change the way we practice medicine here on Earth."