Propulsion Systems of the Future 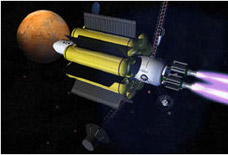 During more than 40 years of spaceflight, a lot of things have changed. Today's Space Shuttle is a luxury ship compared to the Mercury capsules that carried the first American astronauts into space. Forty years ago, a lot of people might have had a hard time believing that Americans and Russians would be living together in space on one Space Station. Space probes have visited every planet except Pluto, and a mission there is currently being planned.

One thing that has changed very little, however, is the way rockets work. While different fuels have been used, and current rocket engines are more high-tech than their early predecessors, the basic concepts involved are basically the same. But, NASA researchers are currently working on a way to change that, as well.

What should a future spacecraft engine be able to do? Certainly, one major goal would be for it to allow spacecraft to travel through the solar system more quickly than they can now. While a lot of things have changed in over 40 years, today's spacecraft are still traveling at about the same speed that John Glenn did when he became the first American to orbit the Earth in 1962. One possible way to change that would be the Variable Specific Impulse Magnetoplasma Rocket (VASIMR). 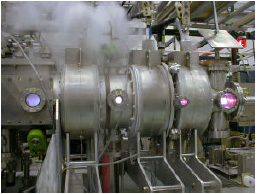 Not only would VASIMR allow for faster space travel, it would have some pretty incredible side benefits, as well. For example, NASA researchers believe that VASIMR would be able to travel to Mars much more quickly than a contemporary chemical-powered rocket, and then, once there, to refuel on Mars for the return flight to Earth. The VASIMR engine could also even help protect astronauts from the dangerous effects of radiation during their trip. In the less-distant future, VASIMR could even help keep the International Space Station (ISS) in orbit without requiring extra fuel to be brought up from Earth.

VASIMR is a plasma-based propulsion system. An electric power source is used to ionize fuel into plasma. Electric fields heat and accelerate the plasma while the magnetic fields direct the plasma in the proper direction as it is ejected from the engine, creating thrust for the spacecraft. The engine can even vary the amount of thrust generated, allowing it to increase or decrease its acceleration. It even features an "afterburner" mode that sacrifices fuel efficiency for additional speed. Possible fuels for the VASIMR engine could include hydrogen, helium, and deuterium.

The use of hydrogen as the fuel for the VASIMR project has many side benefits, according to researcher Franklin Chang-Diaz. In addition to being the director of the Advanced Space Propulsion Laboratory, Chang-Diaz is an astronaut who has flown into space on seven missions, more than any other NASA astronaut. "We're likely to find hydrogen pretty much anywhere we go in the solar system," he said. What this means is that a VASIMR-powered spacecraft could be launched with only enough fuel to get to its destination, such as Mars, and then pick up more hydrogen upon arrival to serve as fuel for the return trip home. Another benefit of hydrogen fuel is that hydrogen is the best known radiation shield, so the fuel for the VASIMR engine could also be used to protect the crew from harmful effects of radiation exposure during the flight. 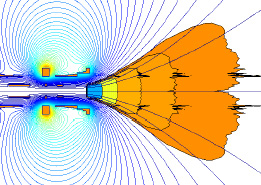 Electrical power sources for the VASIMR engine could include such things as a nuclear power system or solar panels. For long-range flights, Chang-Diaz said, the best option is nuclear power. "Nuclear power is definitely a must if we're going to go to Mars," he said. This means that VASIMR could be integrated with NASA's recently announced Project Prometheus proposal to develop nuclear power generators for spaceflight.

While solar power would not be practical for flying farther out into the solar system, it could have applications closer to home. After VASIMR completes some additional earthbound testing, its designers hope for it to be tested in orbit onboard the International Space Station. A prototype engine would be mounted on the ISS's truss to demonstrate how it works. The prototype would draw its electrical power from the Station's solar panels. If the test were successful, the VASIMR prototype could be moved to a different part of the Station and used to help keep it in orbit. While ISS orbits the Earth, atmospheric drag gradually pulls it closer to the Earth. Every so often, the Station has to be boosted back into a higher orbit. This is done by a variety of means, but all of them require fuel launched into orbit from Earth. The VASIMR engine, however, could change that, since it would use hydrogen, which is already generated as a waste product on the Station. By using waste hydrogen and electricity from the Station's solar panels, VASIMR could maintain the ISS's orbit without requiring any additional fuel. "This is very exciting for us, because NASA would be able to solve a very serious problem," he said.

Although VASIMR is still years away from being used in space, Chang-Diaz said that it has already shown great promise during tests on Earth. So, it is entirely possible that the engine that will carry the first person to Mars is already running in a laboratory on Earth.

NASA's Human Exploration and Development of Space Enterprise
Published by NASAexplores: May 15, 2003