See the ISS in Your Own Backyard
Under the right nighttime conditions you can see bright constellations, a dazzling meteor shower and even the International Space Station.

The Space Station is one of the most visible man made objects in the sky, because it reflects sunlight and often looks like a slow-moving star. This can fool a casual viewer, but it also makes sighting the ISS easier if one knows when and where to look. 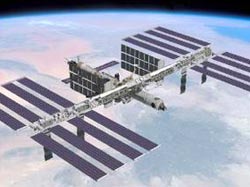 Image to right: The International Space Station can be one of the brightest objects in the nighttime sky. Credit: NASA

NASA SkyWatch is an Internet tool that provides the information needed to view the Space Station and other satellites. SkyWatch can be as simple or complex as users care to make it. Amateur astronomers can easily master the basics of calculating sighting information, while seasoned star watchers can personalize the processing of Earth-orbiting satellites with more detail.

The SkyWatch tool uses five tabs to calculate when and where to view the ISS and other satellites. A variety of NASA satellites can be chosen with the latest information on the Space Station is displayed by default. 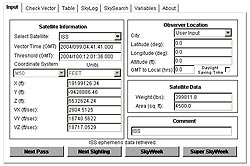 Image to right: The NASA SkyWatch applet allows users to determine when space craft and satellites will be above the horizon at a given place and time. Credit: NASA

First you will need to select a viewing location from the lengthy list of available cities. Once this selection is made, push the "Next Sighting" button. This action will instruct NASA SkyWatch to find the next future sighting of the chosen spacecraft or satellite at the selected location.

NASA SkyWatch will look at each pass the ISS will make at the location and determine if it will be visible or not. If the Station can be seen, the table will be filled out with the time of the pass. Once a sighting has been found, pressing the "Sky Track" button will display the sky on the screen with stars, constellations, the Sun, Moon and visible planets, along with the track the satellite will take across the sky as observed at your location. 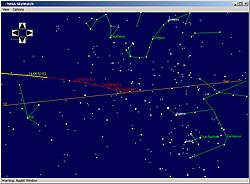 Image to right: NASA SkyWatch allows users to track objects in the sky and easily locate them among the stars and planets. Credit: NASA

SkyWatch users must have a compatible Internet browser and the proper Java capabilities installed. A security error will appear and the applet will not load if the proper requirements are not met.

The ISS usually appears over the western horizon and disappears over the eastern horizon in a matter of a few minutes. The best time to observe the Space Station is near dawn or dusk, when the viewer is in near-darkness and the passing Station continues to reflect light from the rising or setting Sun.

Visit the official SkyWatch Web site at http://spaceflight.nasa.gov/realdata/sightings/ to learn more about how to track the International Space Station and other satellites in the night sky.