STS-114 Mission Specialist Wendy Lawrence: 'Hanging 10' for Shuttle Countdown
In 1969, America was riding a wave at war. The West Coast was rich in youth culture. The beach was more than a place; it was a lifestyle.

Still, more than 35 years later, Wendy Lawrence, who grew up in Southern California, looks to a place beyond where the sand meets the sky as she prepares to soar into space aboard the next Shuttle. 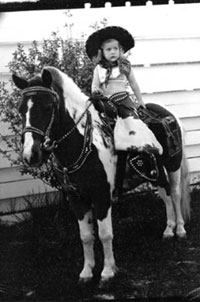 At 10 years old, Lawrence -- like so many young Americans -- watched from her home on a small, black-and-white television as man first walked on the moon. The ridged footprint engraved on the moon's sandy surface inspired her to set her sights higher.

"That was the moment in time that I decided I wanted to be an astronaut," Lawrence said. "It gave me a purpose; it gave me a direction in which to head."

Lawrence knew a solid education would help launch her dream of becoming an astronaut.

"I could have very easily have fallen into the 'beach bum' lifestyle," she said," but because I had been bitten by the dream of flying into space and becoming an astronaut, I stayed in school."

Deemed a naval aviator in 1982, Lawrence has flown more than 1,500 hours in six different types of helicopters and has made more than 800 shipboard landings.

Ten years later, she was selected out of the nation's top aviators by NASA to fly aboard the highest-flying aircraft around: the Space Shuttle. Lawrence reported to the Johnson Space Center in the summer of 1992, where she completed a year of flight training and qualified as a mission specialist. 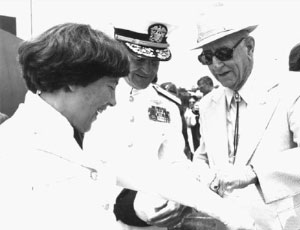 Image to right: Wendy Lawrence's father and grandfather congratulate her upon her graduation from the U.S. Naval Academy. Credit: Family photo/NASA

Even before joining the Astronaut Corps, Lawrence understood firsthand the dangers of flight as her father and grandfather -- both skilled aviators during wartimes -- experienced their share of unexpected events that can happen.

"My mother's father flew in World War II," she said. "He was shot down over the Philippines and, fortunately, was rescued. My father was shot down over Vietnam and didn't return until six years later. So, my family understands the risks."

A veteran of three spaceflights and fully aware of the potential hazards involved, Lawrence continues her commitment. Her enthusiasm for exploration comes from her childhood attraction to Star Trek and its out-of-this-world fantasies that may one day become real.

"I'd like to see us move away from low-earth orbit and begin to explore the solar system, just like we've done for centuries exploring the Earth," she said. 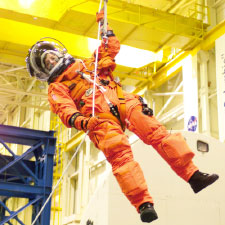 Moving far beyond the outskirts of Earth's atmosphere will take many bold steps of humankind and the ingenuity of thousands of people on Earth. Returning the Shuttle to flight is one such bold step that will enable a progression of others to follow.

After many months of long-hour training sessions, Lawrence readies to board Discovery, a name ever-fitting of its purpose to return to flight. The STS-114 mission will deliver supplies and science equipment to the International Space Station as well as evaluate new ways to inspect and ensure vehicle safety for future Shuttle flights.

The Shuttle fleet's return to flight is a major step in a journey of discovery that will last a lifetime.

"We are by nature explorers," Lawrence said. "You can look at the centuries of history where people were committed to finding new worlds and establishing them. It's time for us to turn our direction on beyond low-earth orbit and do the very same thing."